The HMS Prince of Wales forms part of a ‘ring of steel’ security and comes ahead of the showdown meeting between President Joe Biden and Boris Johnson. 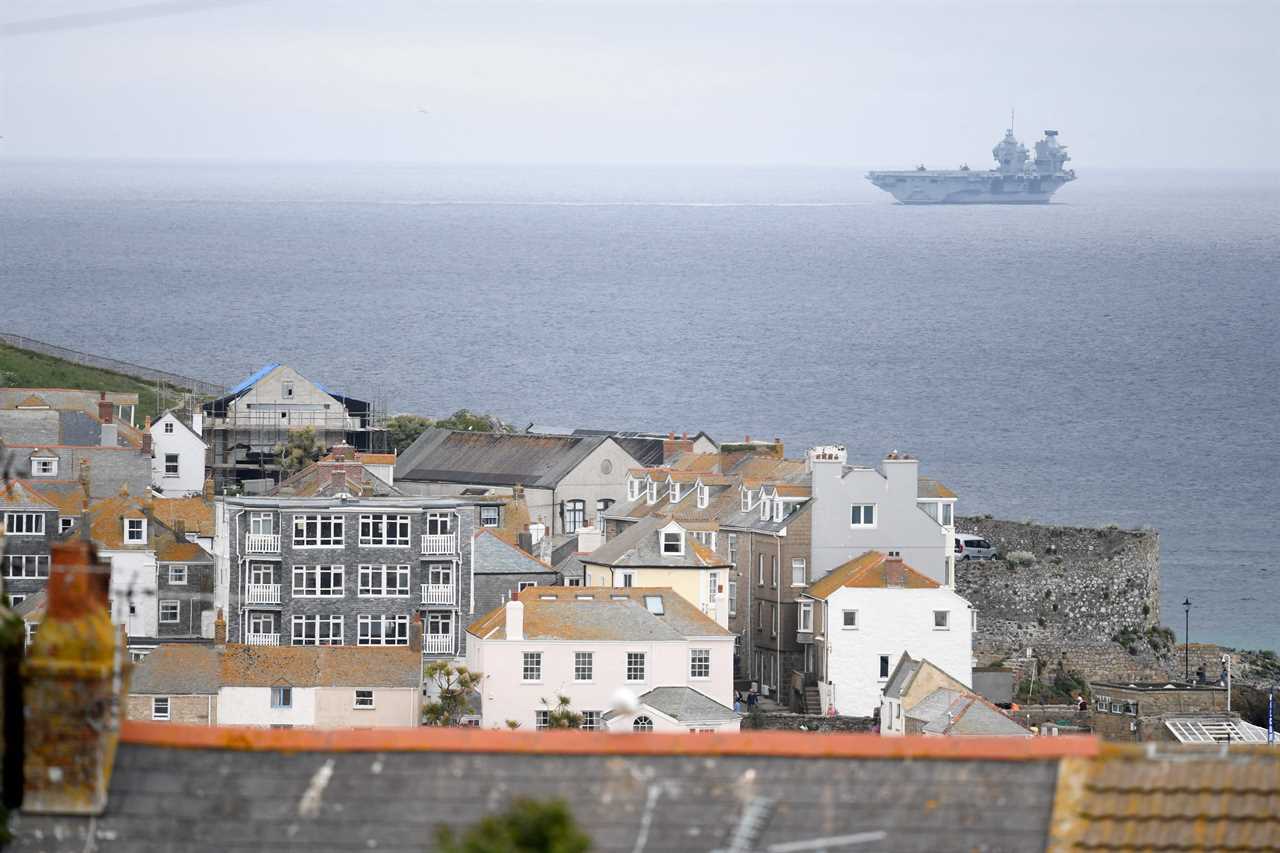 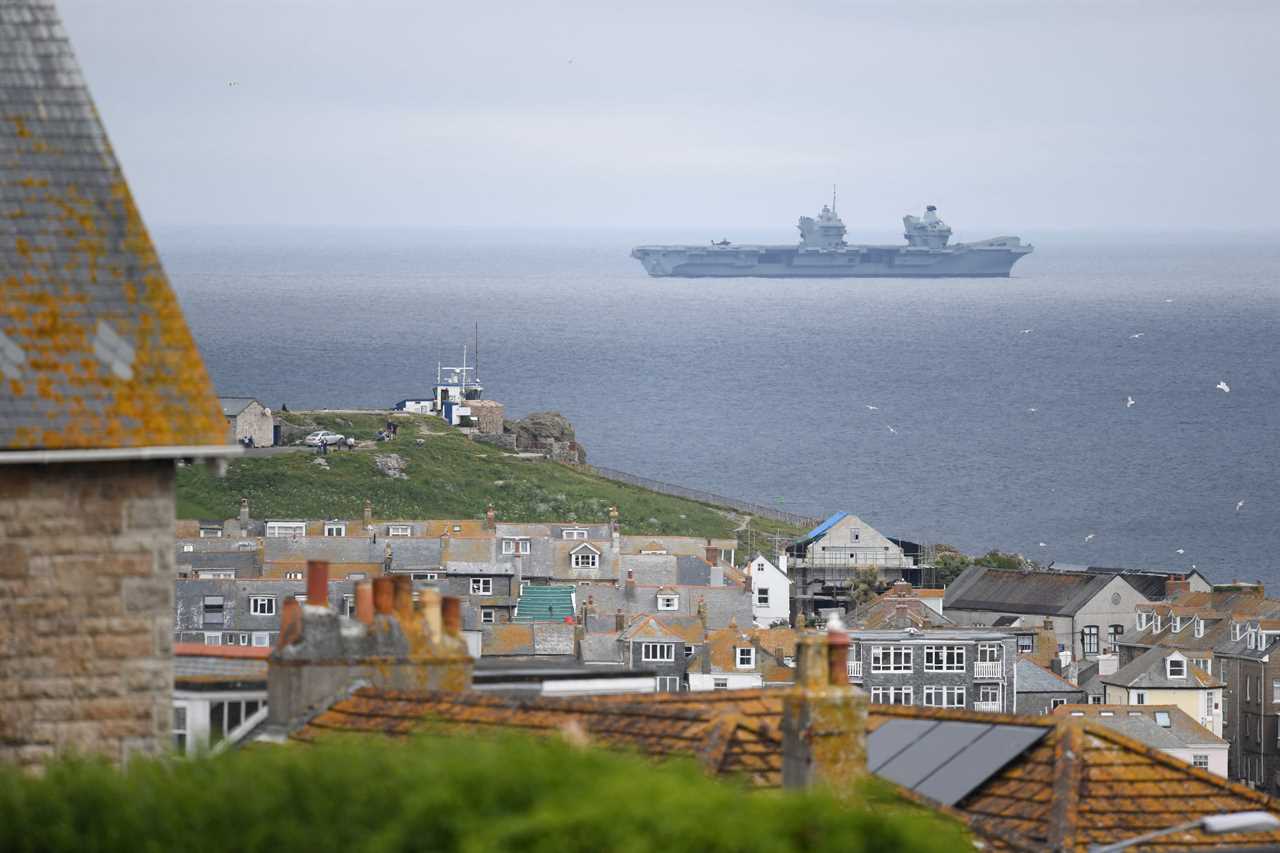 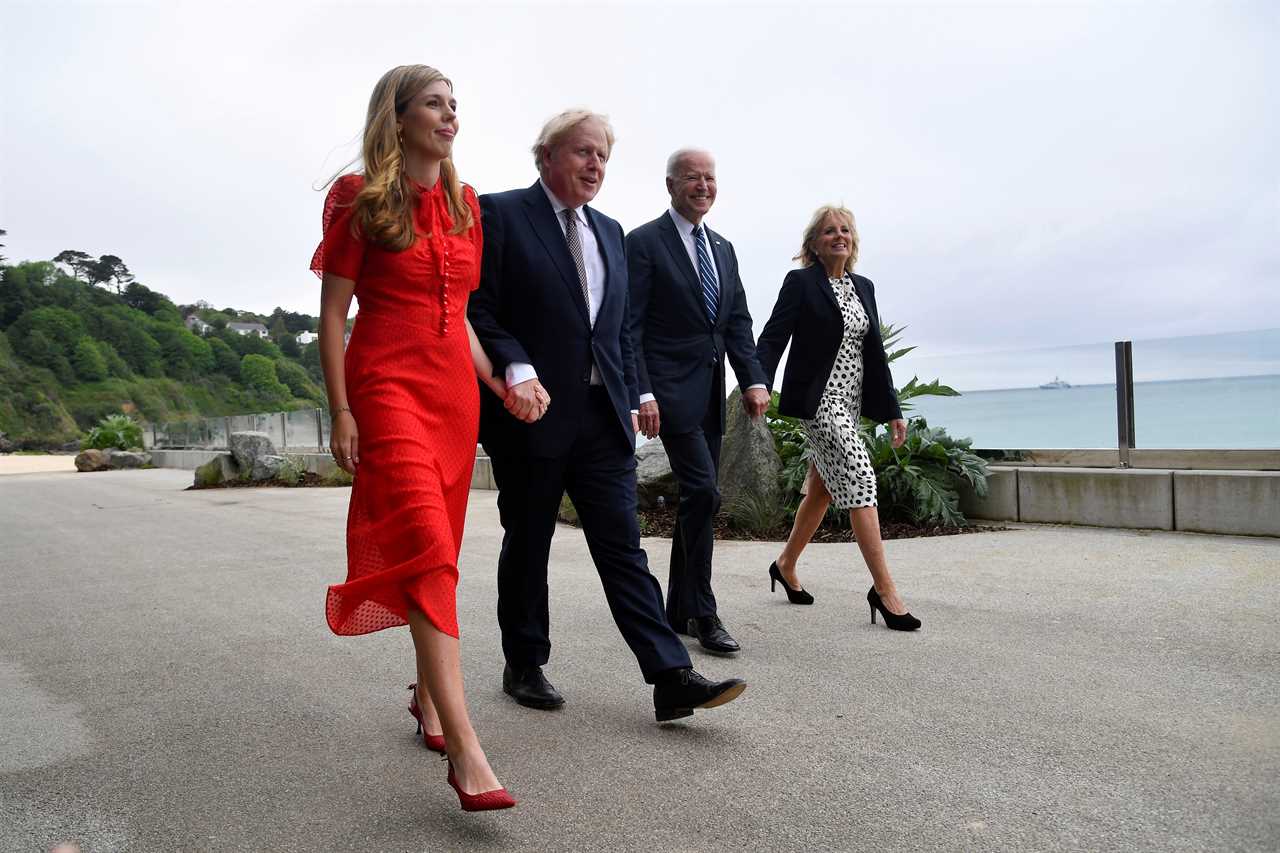 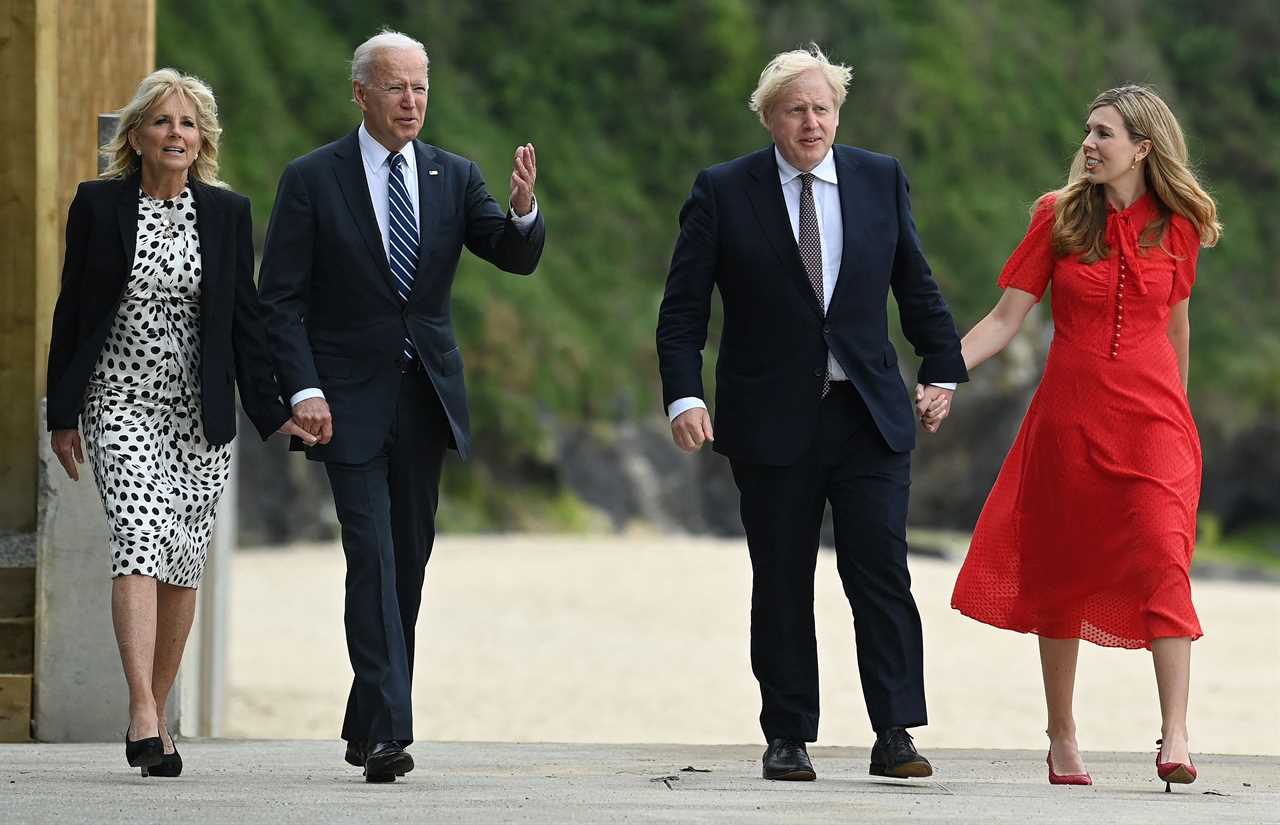 They were joined by their wives Carrie Johnson and Jill Biden 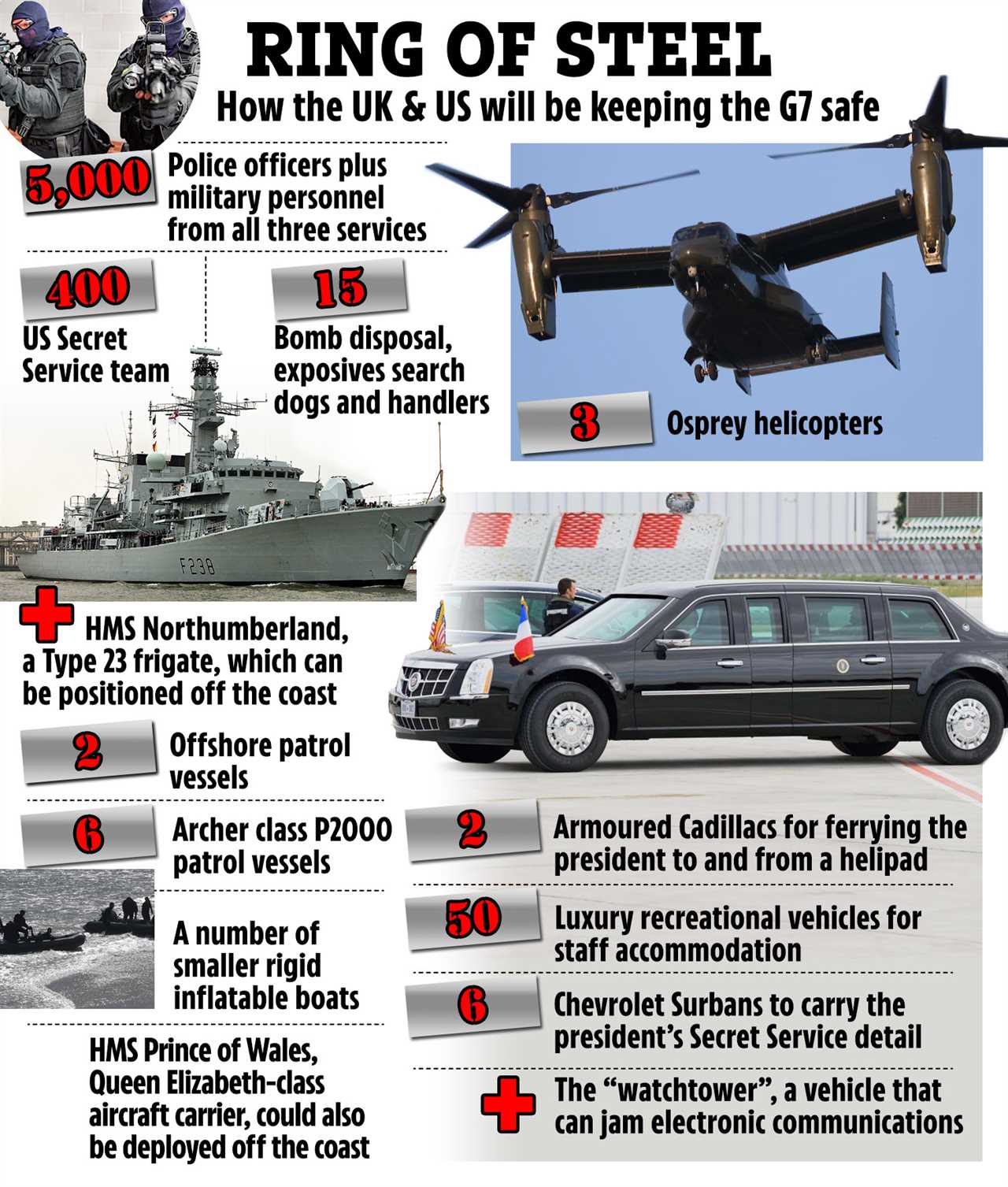 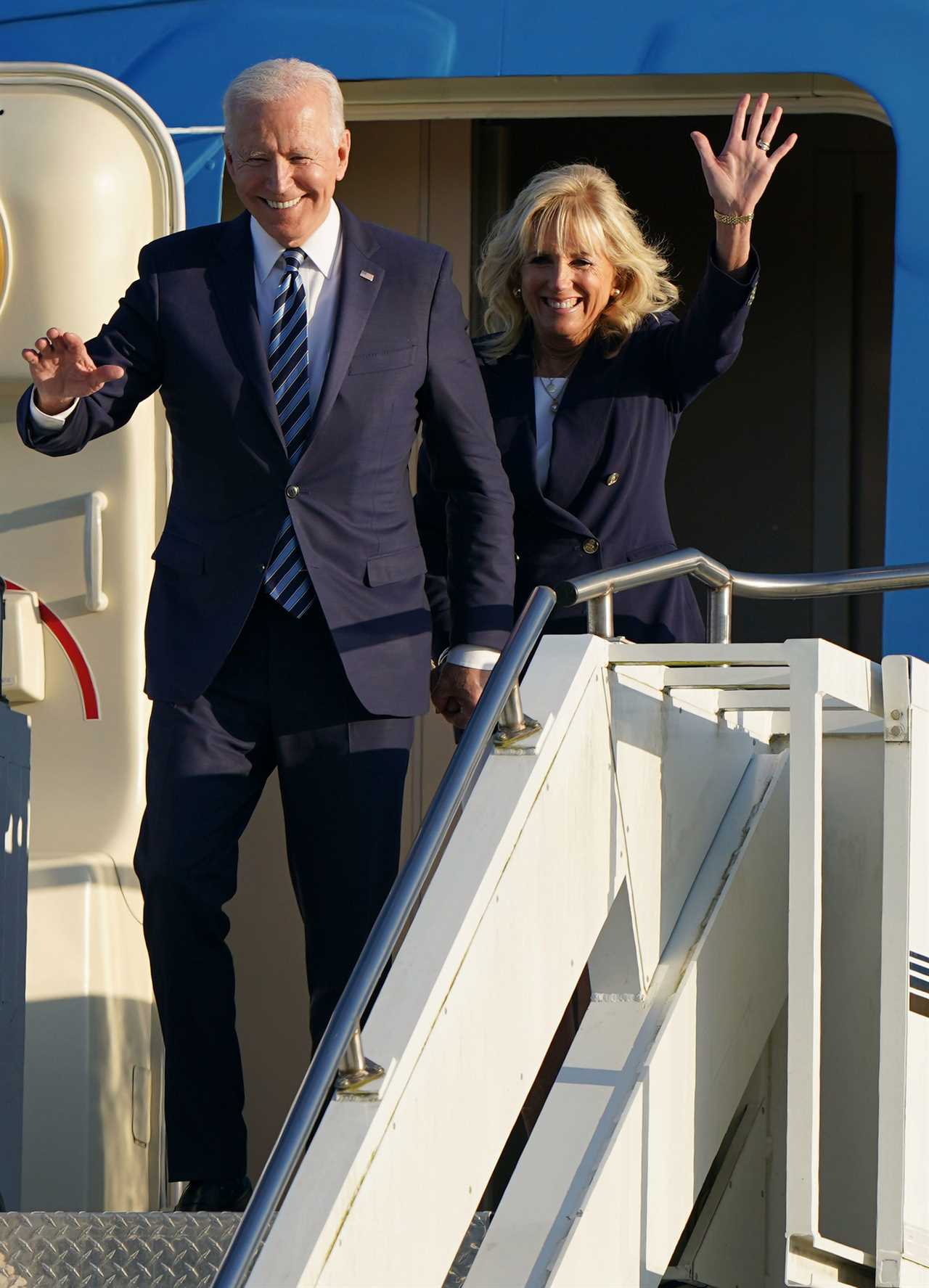 The President has arrived in the UK yesterday

Other secuirty will include HMS Northumberland, a Type 23 frigate, will be positioned off the coast and use its radar system to help police identify potential threats from the air and sea.

More than 50 luxury cars and 400 Secret Service agents touched down at St Mawgan airbase near Newquay ahead of Biden’s arrival.

A Giraffe agile multi-beam radar system has been deployed – which can identify and track targets while providing coastal surveillance.

And there will be 15 explosives search dogs and handlers from the army operating under police command.

Video footage emerged of two Sea King and three Osprey helicopters soaring above Cornwall and Devon as they did test runs of President Biden’s route from the airbase to Tregenna Castle Resort in St Ives.

The airspace above Cornwall is largely shut – but cops are reserving the option to deploy one of their 18 drones if necessary. 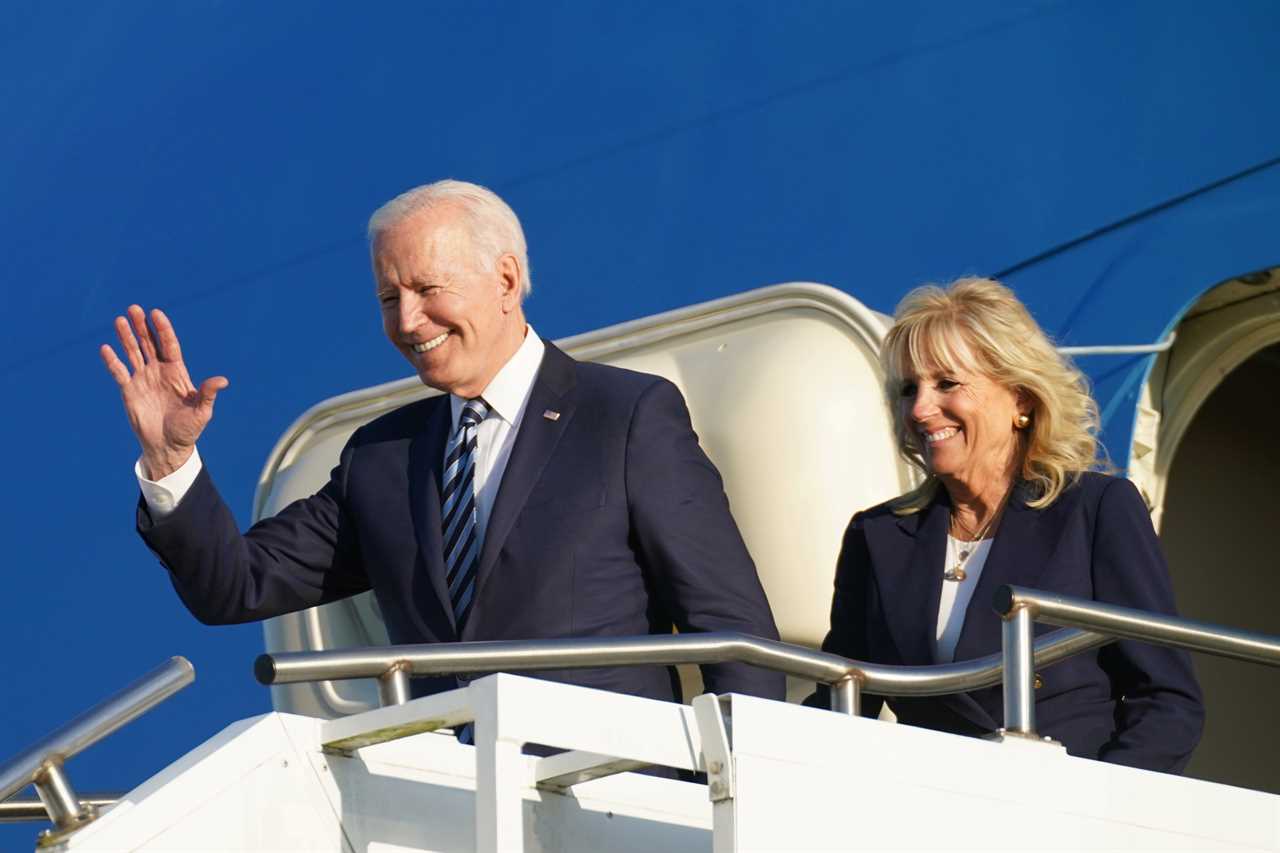 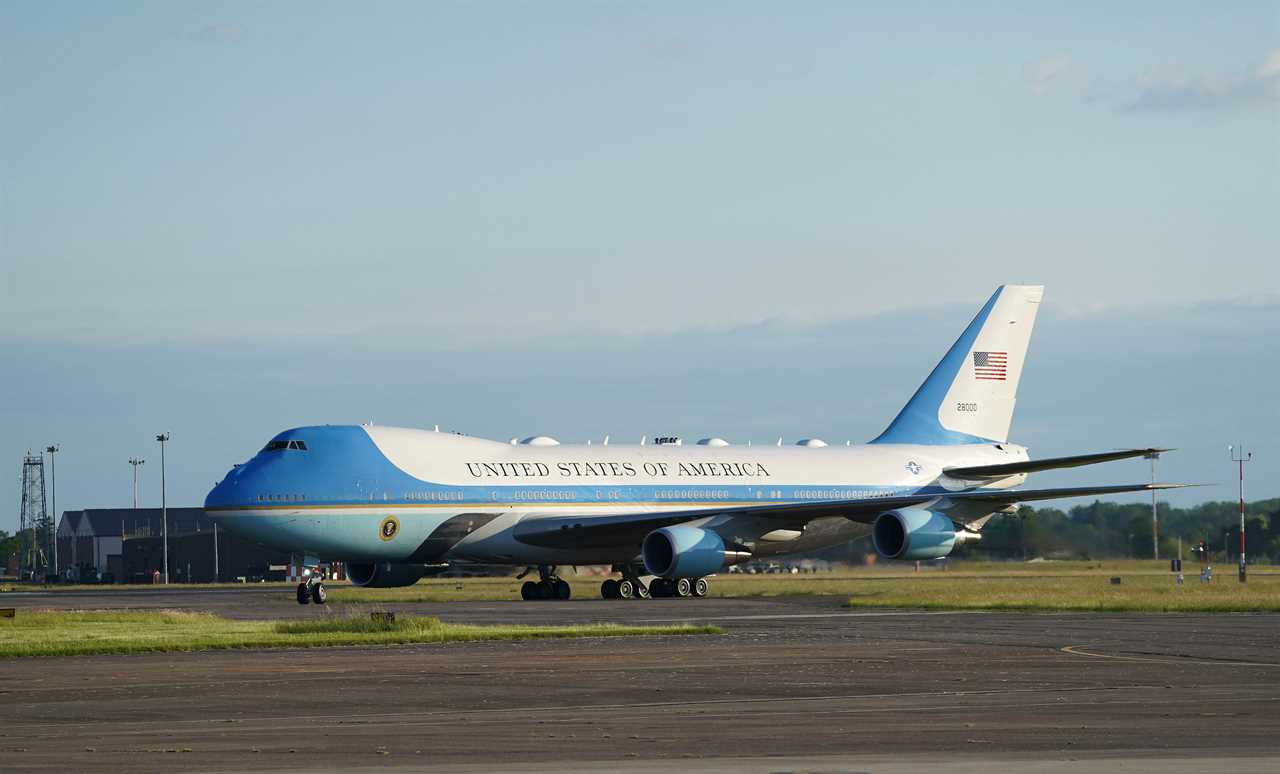 Biden landed ahead of the historic talks 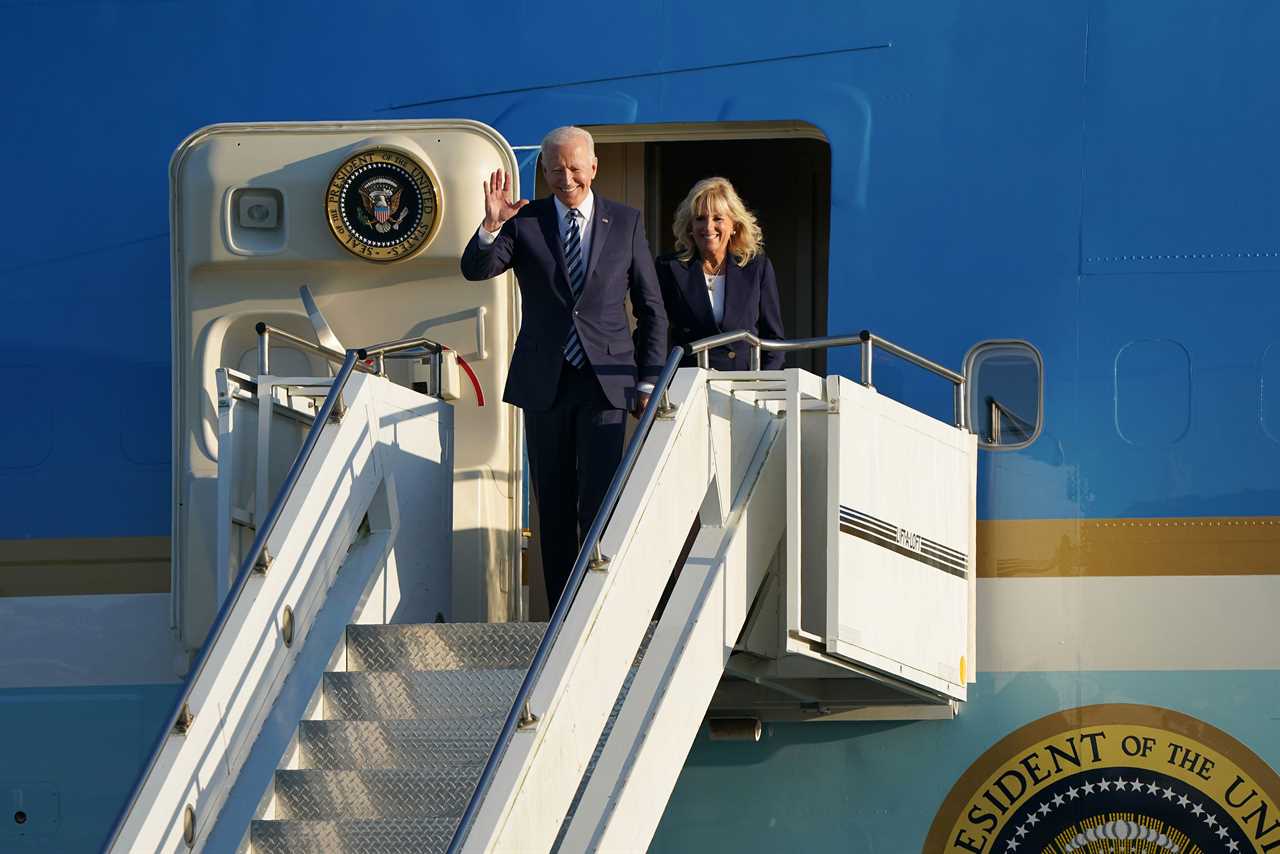 On top this, some 1,000 police will be staying on a cruise liner at Falmouth harbour and in camper vans parked at the RAF base in Newquay.

It had been reported that the world leader was expected to leave the Cadillac ‘The Beast’ mega-car in his homeland amid fears they might get stuck in the rural county’s narrow and winding roads.

Now it’s been revealed they were transported into the UK in a Boeing C-17 Globemaster III ahead of the arrival of Air Force One.

The specially built £1.1million Cadillacs both have five inch-thick bulletproof windows capable of withstanding a nuclear, biological or chemical attack.

Encased in ballistic armour and weighing about nine tonnes, each contains a sealed cabin with an oxygen supply and bags of blood matching Biden’s type in case of a medical emergency. 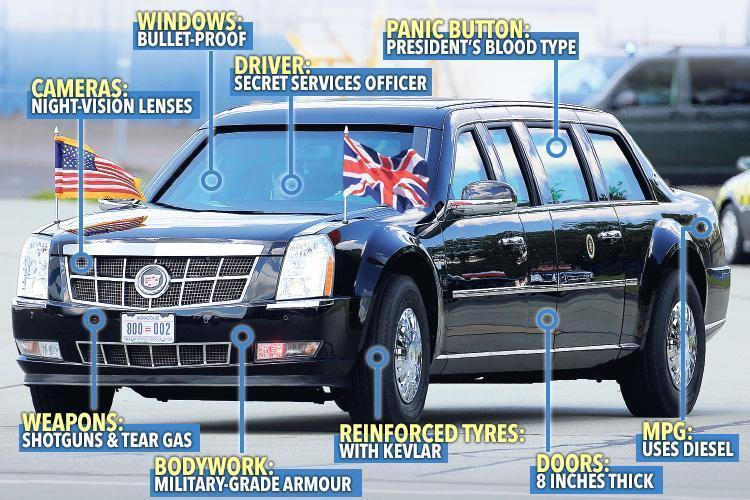 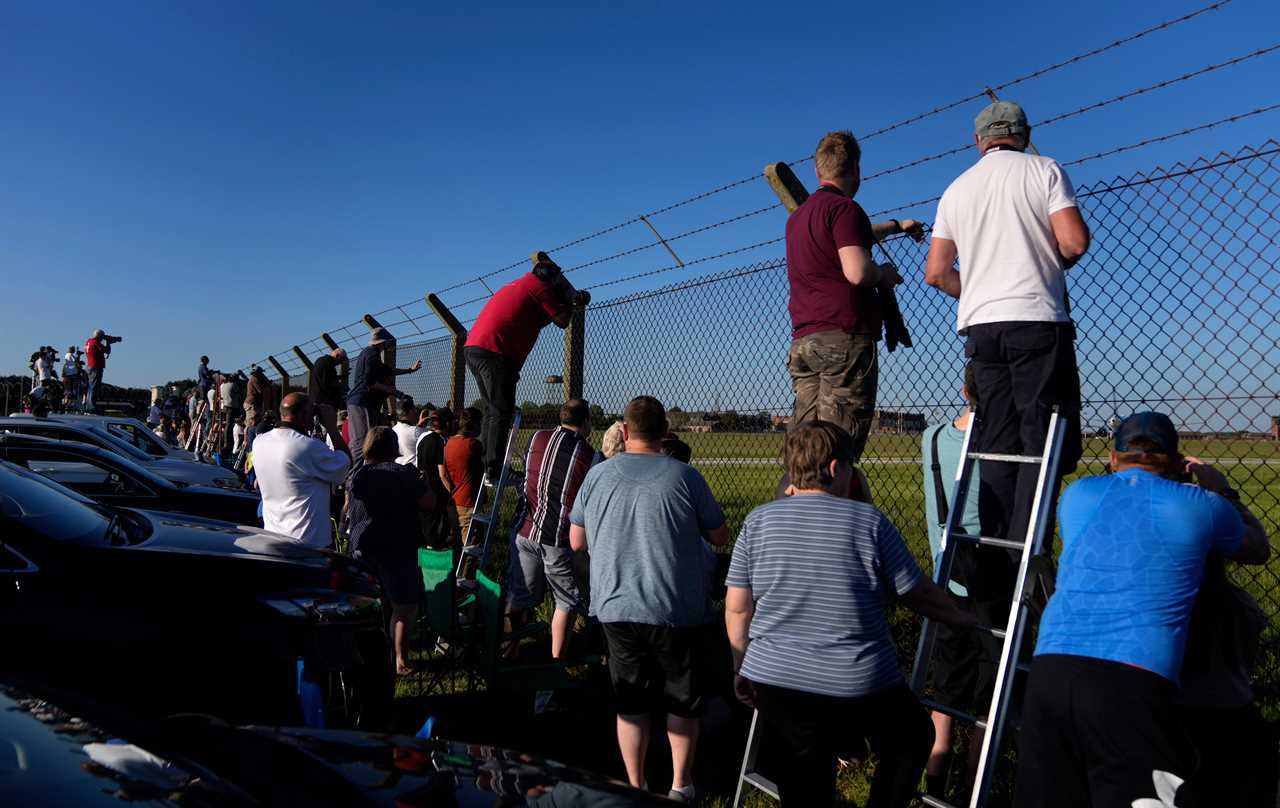 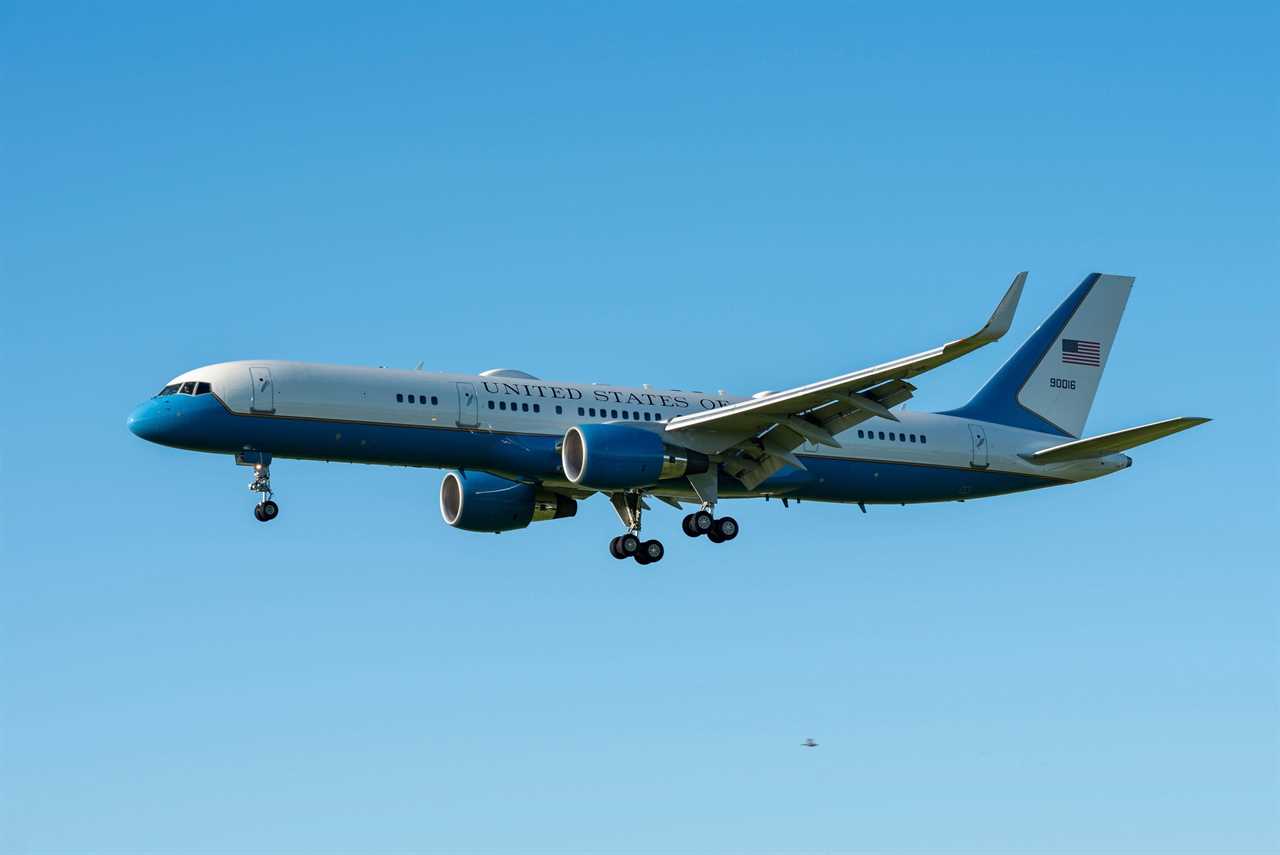 Anyone foolish enough to grab the cars’ door handles without authorisation can expect to be hit with a 120-volt shock delivered at the flick of a switch from those inside.

The cost of policing the summit has been put at £70 million – but Devon and Cornwall police won’t be bearing the cost alone, with the drafting of mutual aid officers.

A run of good weather and the easing of lockdown restrictions has meant every hotel and B&B within a 30-mile radius of the summit has been booked by holiday-makers.

Images have surfaced of caravans clogging the A30 on Monday, leaving much of the road along the Devon-Cornwall border paralysed by traffic.

The US recreational vans – some the size of an articulated lorry – can sleep up to eight people and come equipped with satellite TV and other homely comforts.

The company hiring them out – some at a rate of a whopping £2,500 a week – has barred the Secret Service from driving them and provided their own chauffeurs.

Leaders from Canada, France, Germany, Italy, Japan, the UK and the US are meeting in Cornwall for the annual G7 summit this Friday and are expected to discuss Covid vaccines donations to developing countries and a 15 per cent global tax rate. 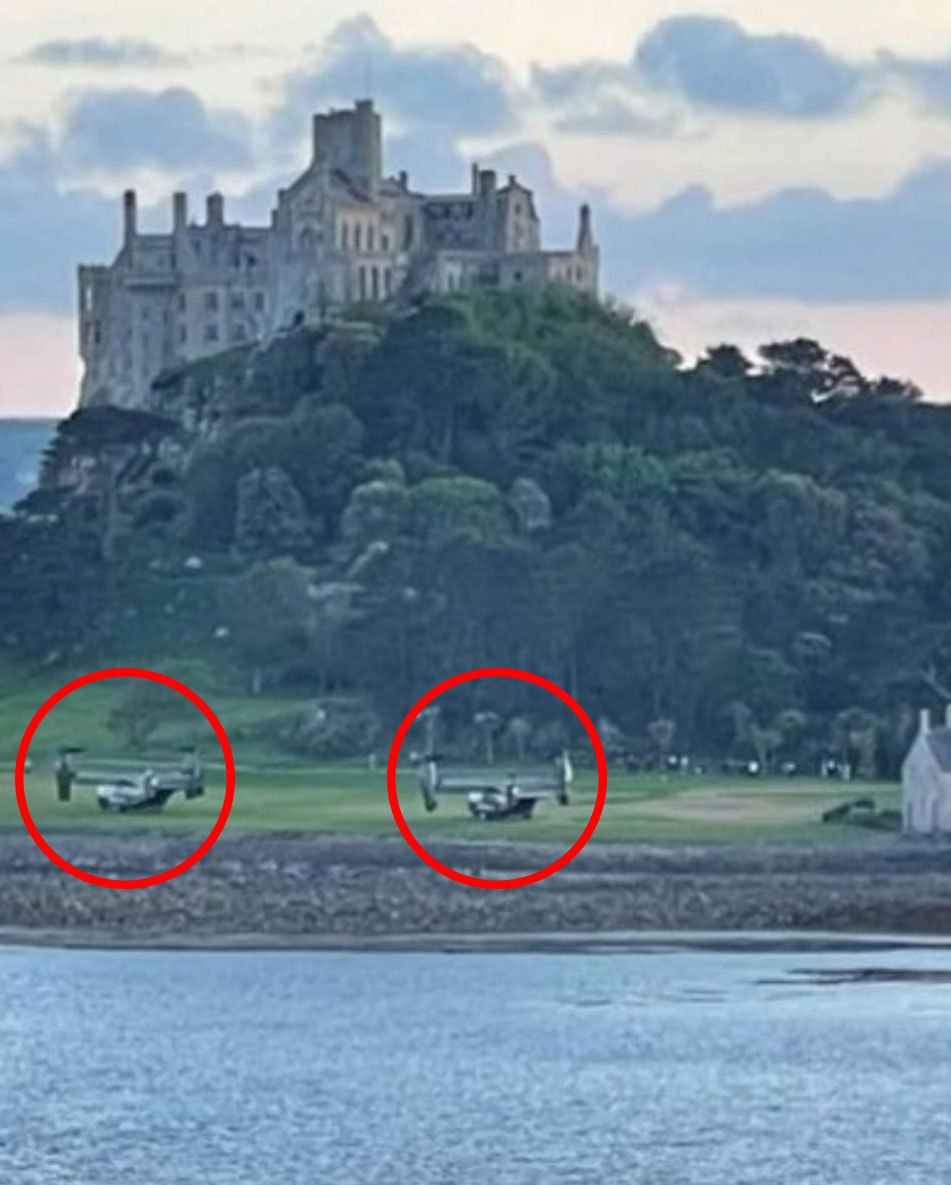 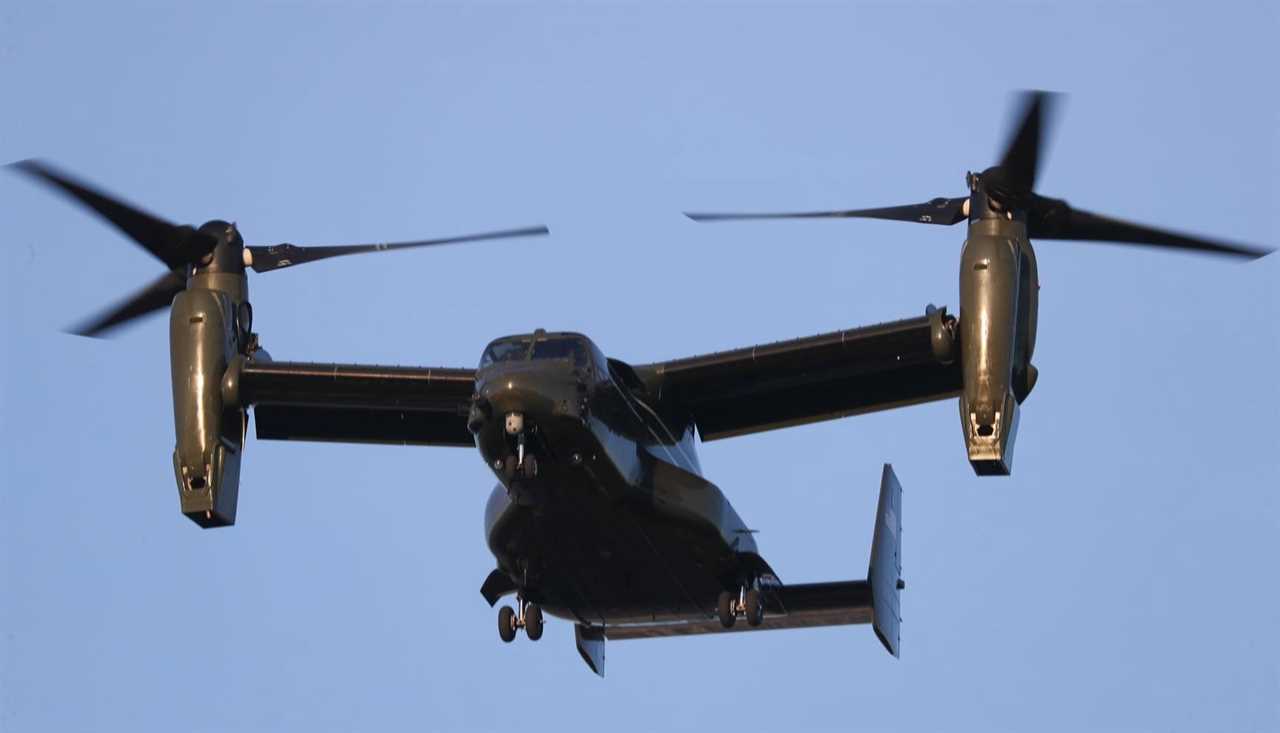 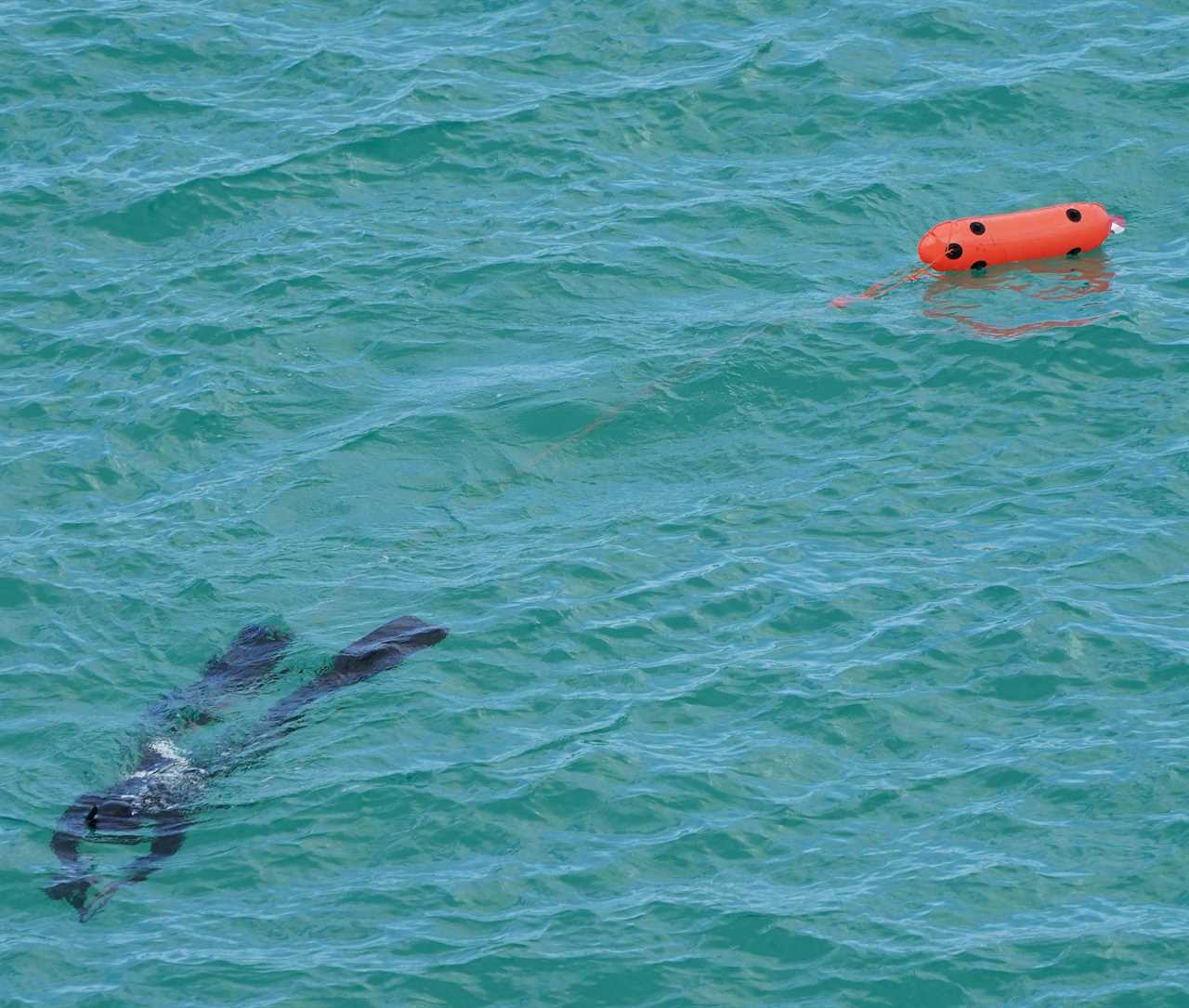 A man snorkelling off the coast at Carbis Bay 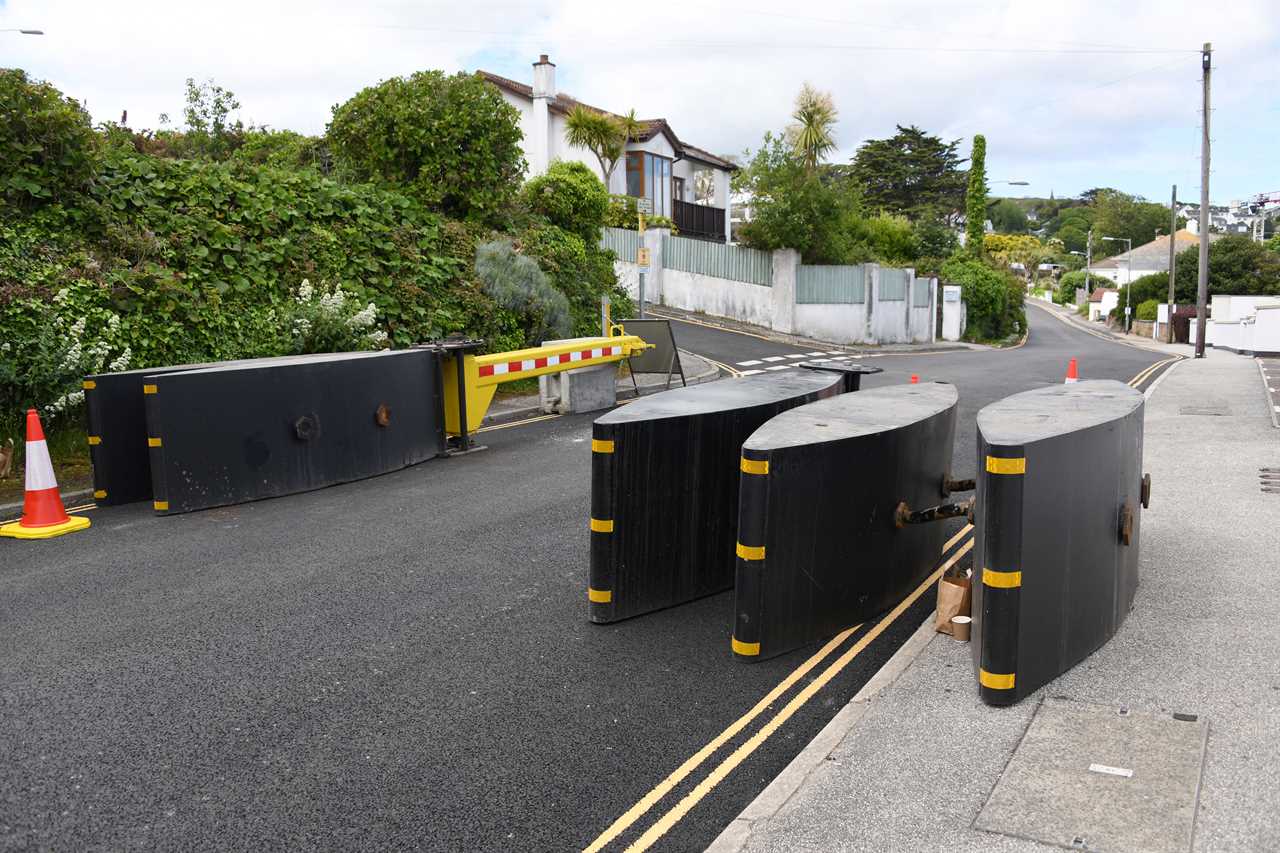 Road blocks, similar to those used on London Bridge following a spate of terror attacks, have been deployed in Carbis Bay

The vehicles are expected to be driven to the Tregenna Hotel where President Biden will be staying for three days.

US pilots were also spotted practice landing a chopper – known as Marine One when the US President is on board – on Tregenna Castle golf course on Monday evening.

Other jets were seen tracing the route Air Force One will take when it arrives at Newquay Airport later this week.

Three US Marine Osprey aircraft were also seen over hovering over Haldon Hills near Exeter then Carlyon Bay and finally at Tregenna Castle yesterday evening.

The aircraft were brought over by US Air Force’s Boeing C-17 Globemaster III and offloaded at the Royal Navy airbase Culdrose, near Helston, on Sunday.

As part of a security ramp-up ahead of Friday’s meeting, police have closed down up to 30 bridges across the A30 – one the main road leading into and through Cornwall.

A barrage of steel fences have been planted around Tregenna Castle as many roads and footpaths remain shut for up to 21 days.

One notice reads: “It is necessary to mitigate the danger to the public or damage to the highway (from incidents) that may arise from the hosting of an event taking place in Carbis Bay.”

Residents living near the meeting venue will have to show two forms of ID to be allowed past check points.

Devon and Cornwall Police are expecting protests over weekend from groups like Extinction Rebellion.

More than 6,500 police from forces across the UK are set to be deployed during the summit.

A police spokesperson for G7 planning said: “We will be deploying over 6,500 officers and staff to this event and we are supporting a vast range of local businesses and suppliers as part of our extensive logistical arrangements.

“This includes using over 4,000 rooms at almost 200 venues across Devon and Cornwall which will support local communities and accommodate police officers and staff deployed from across the UK.

“In order to secure further essential capacity, we reviewed a number of options and recently agreed to hire the MS Silja Europa, operated by Tallink; taking into account impacts to the environment, community, the operational needs, and those of our officers and staff.

“The vessel will remain static, moored in Falmouth, used for a 10-day period, with only the accommodation, catering and other essential facilities in use.

“We are working closely with the vessel owners, ports authorities and health partners to ensure the safe use of this accommodation. Those staying onboard will strictly follow all the applicable Covid safety guidelines, enhanced by daily testing – consistent with staff staying at all other accommodation sites across the force area.”