IT was the most spectacular wedding the world had ever seen.Forty years ago, Prince Charles and Princess Diana tied the knot in front of a global..

IT was the most spectacular wedding the world had ever seen.

Forty years ago, Prince Charles and Princess Diana tied the knot in front of a global audience of 750million. 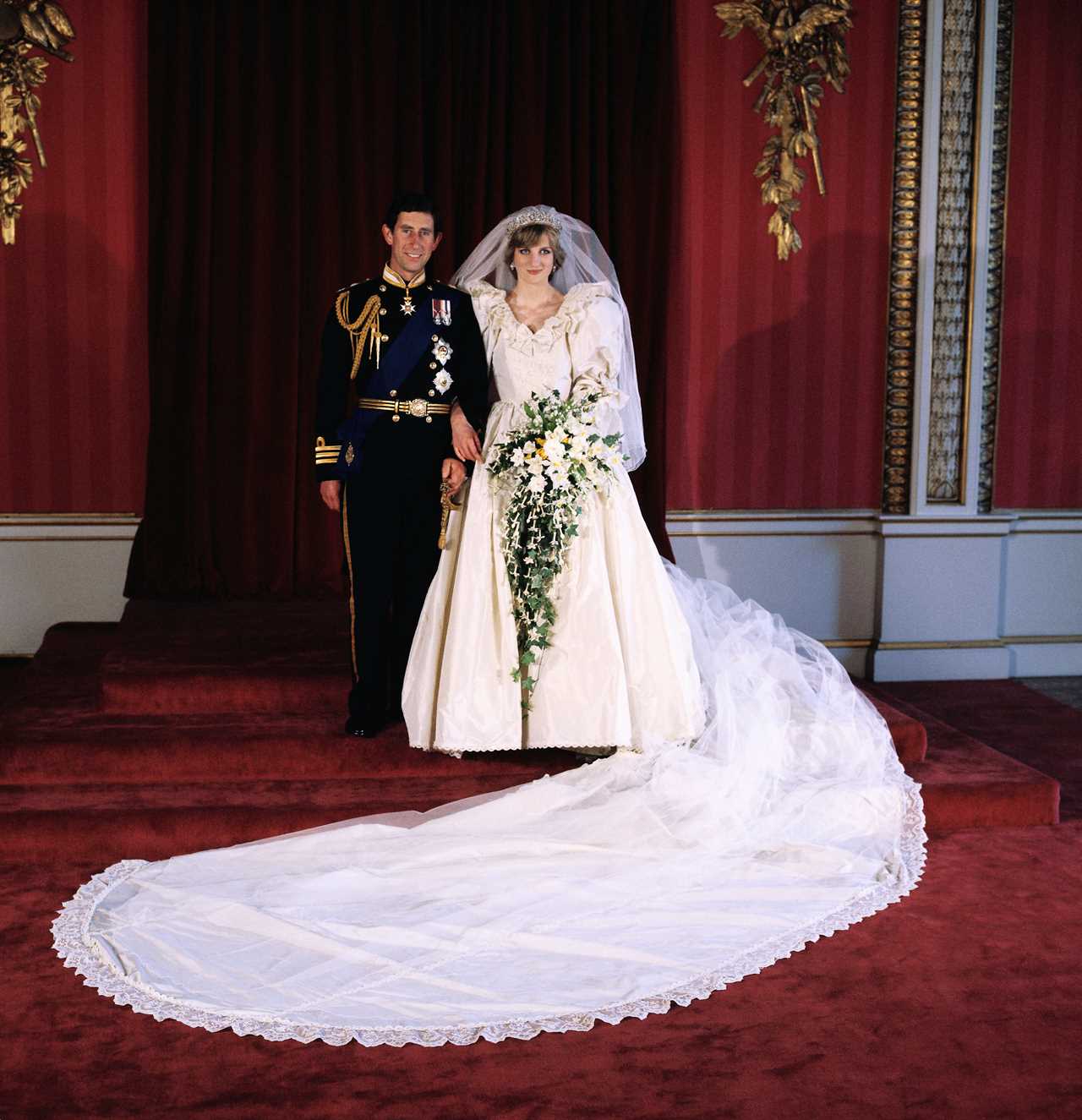 The blushing bride was just 20 when she walked down the aisle at St Paul’s Cathedral, followed by her record-breaking 25ft train, on July 29, 1981.

We all know the misery and pain that was to follow. But on that magical day, it seemed like a fairytale come true.

Now a TV documentary, The Wedding Of The Century, narrated by Angela Rippon to be released tomorrow, includes newly restored footage of the event.

It also has interviews with some of the key players involved in making Charles and Di’s big day, whose stories we tell here, and Sun photographer Arthur Edwards shares his own memories. 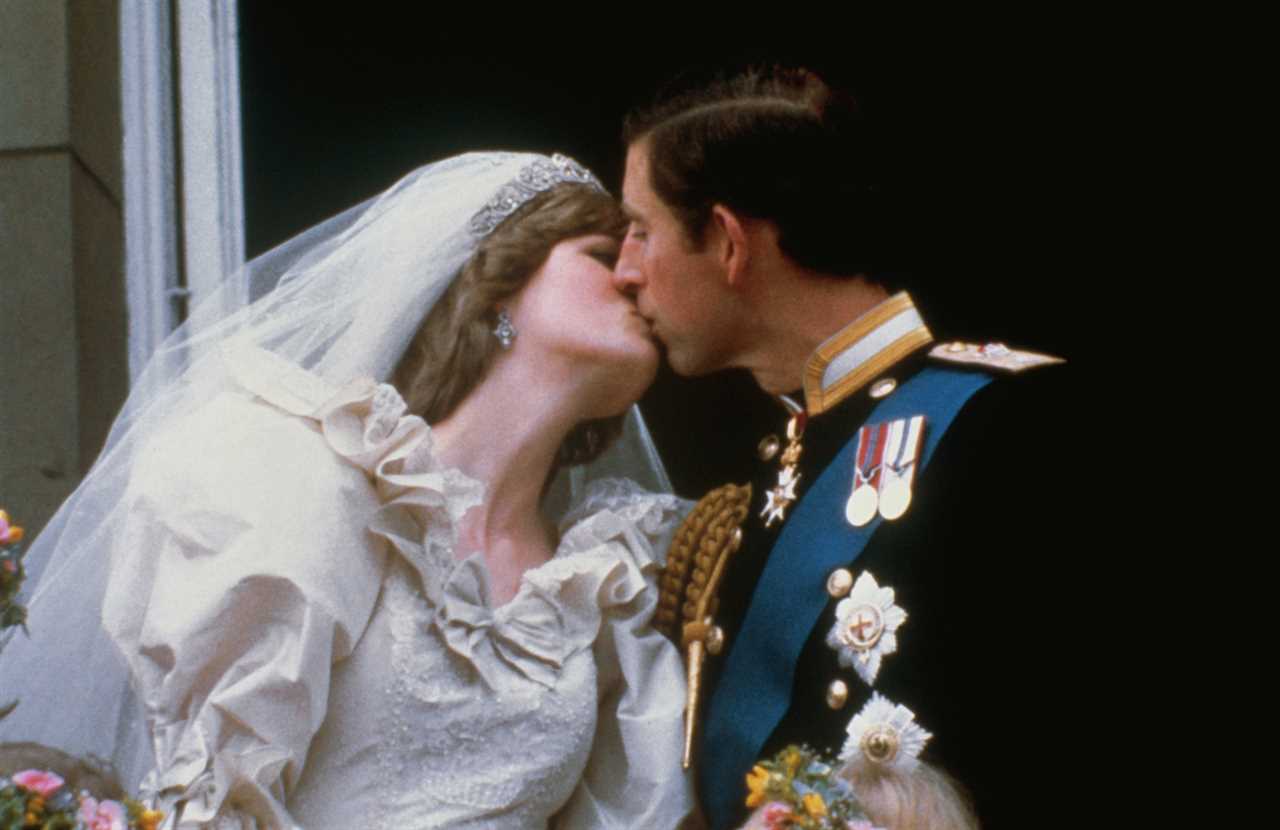 ROYAL florist David Longman was tasked with decorating the cathedral and arranging the bouquets.

He was conscious of creating something that worked with Diana’s personality and her bridal gown. 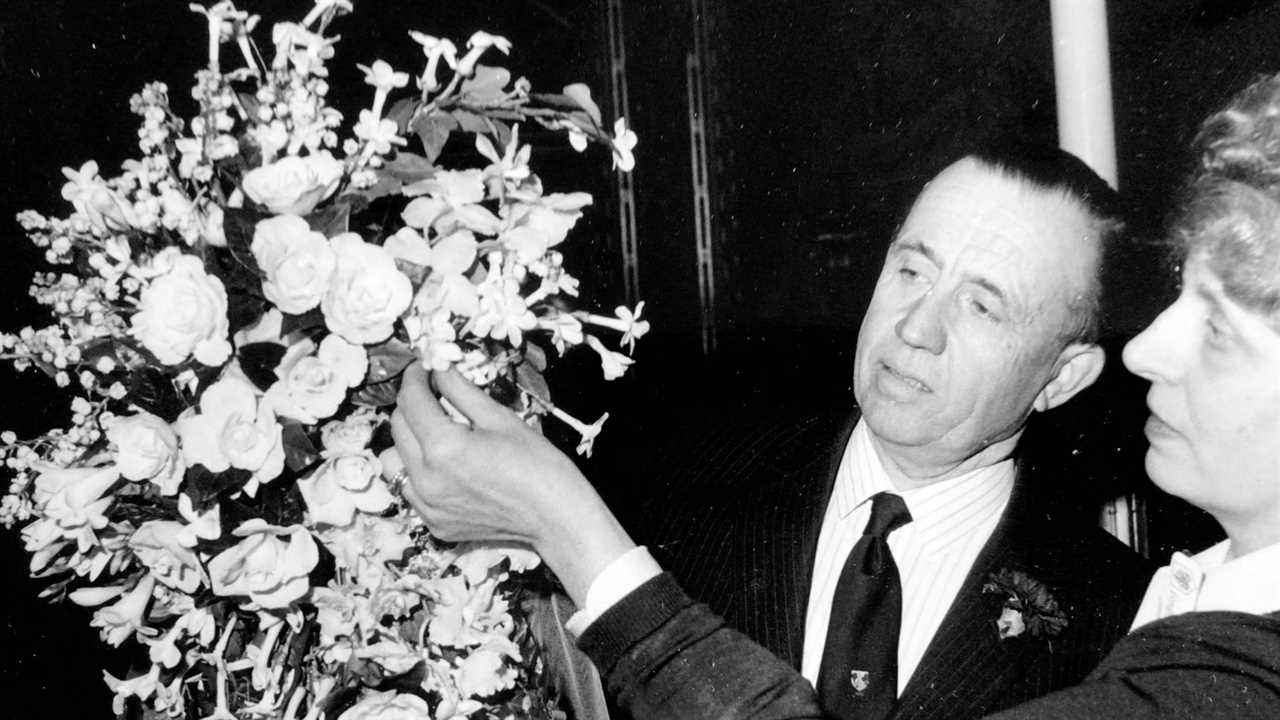 David, whose father had done the wedding flowers for the Queen and Prince Philip, said: “It’s a combination of what you know about the dress, the disposition of the bride, her hair, her height and what she thinks about it.

“She’s the one you have to please.” But dress designers David and Elizabeth Emanuel were not giving much away. Londoner David, now 89, said: “They were very discreet.

“They did give me a patch of material and an outline sketch, so I knew it was going to be a very voluminous dress.

“Diana was excited, intrigued, she wanted guidance. She was a very normal person. She wasn’t particularly demanding. Always charming.”

In the documentary, David gives a glimpse of his book of designs for the royal wedding. Diana chose a bouquet with lily of the valley, stephanotis and orchids.

David, who had a team of 20 working on the arrangements, said: “The prince made one request, and that was a Mount-batten rose in memory of his uncle, who he was very attached to. 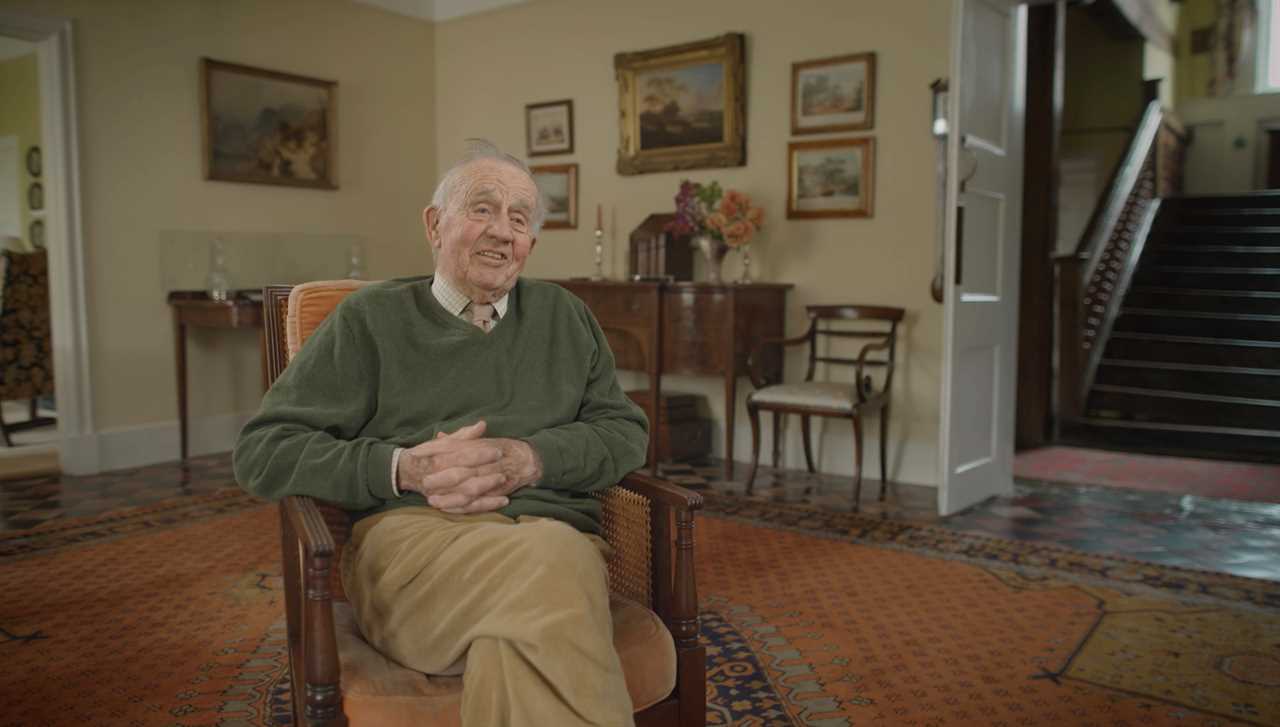 David Longman on BritBox’s The Wedding Of The Century

“There was only one grower and it was the only colour — it’s a golden rose — in the centre of the bouquet.”

David created two identical bouquets, one of which was placed on the Tomb of the Unknown Warrior in Westminster Abbey, a tradition started by the Queen Mother when she married Prince Albert, later King George VI, in 1923.

There was one heart- stopping moment, though.

David said: “I had an awful shock because I saw Diana get out of the carriage, and there was no bouquet. I thought, ‘My goodness, what’s happened this time?’

“They got her out, got her dress right, then a footman went back into the carriage for the bouquet.

“I must admit that for 30 seconds, I had a very nasty moment.”

ST PAUL’S Cathedral choirmaster Barry Rose got quite a shock when he was listening to the radio one day.

He said: “I was sitting at home with my wife, having lunch and listening to the one o’clock news. The headline said the Prince of Wales and Lady Diana Spencer would be married in St Paul’s Cathedral. 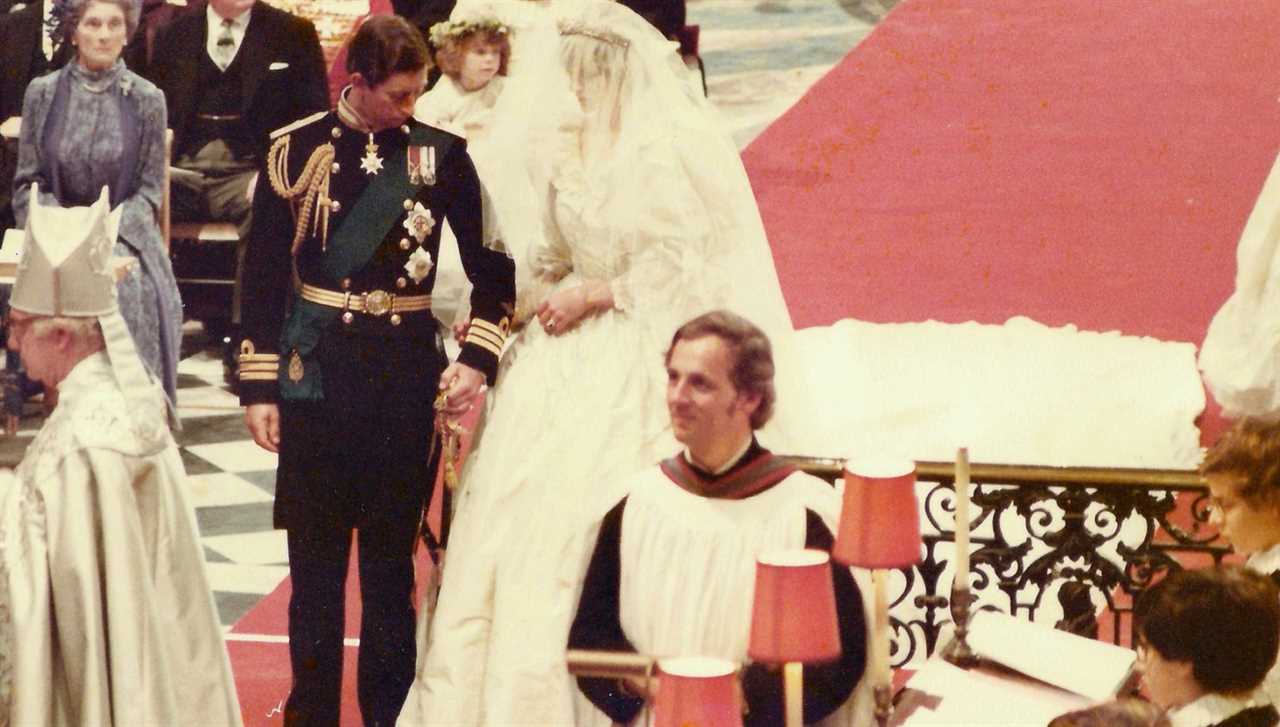 In fact, Prince Charles chose St Paul’s because of its open layout, which meant all the guests would be able to watch the ceremony, whereas the view in the Abbey is restricted by the positioning of the organ half way up.

The clergy at St Paul’s were in on the plans — but no one had told Barry.

By the time he arrived at St Paul’s that afternoon, it was swarming with photographers, reporters and camera crews wanting every last detail about the place.

Barry, now 87, who lives in London, recalled: “They even followed us into the loo.” 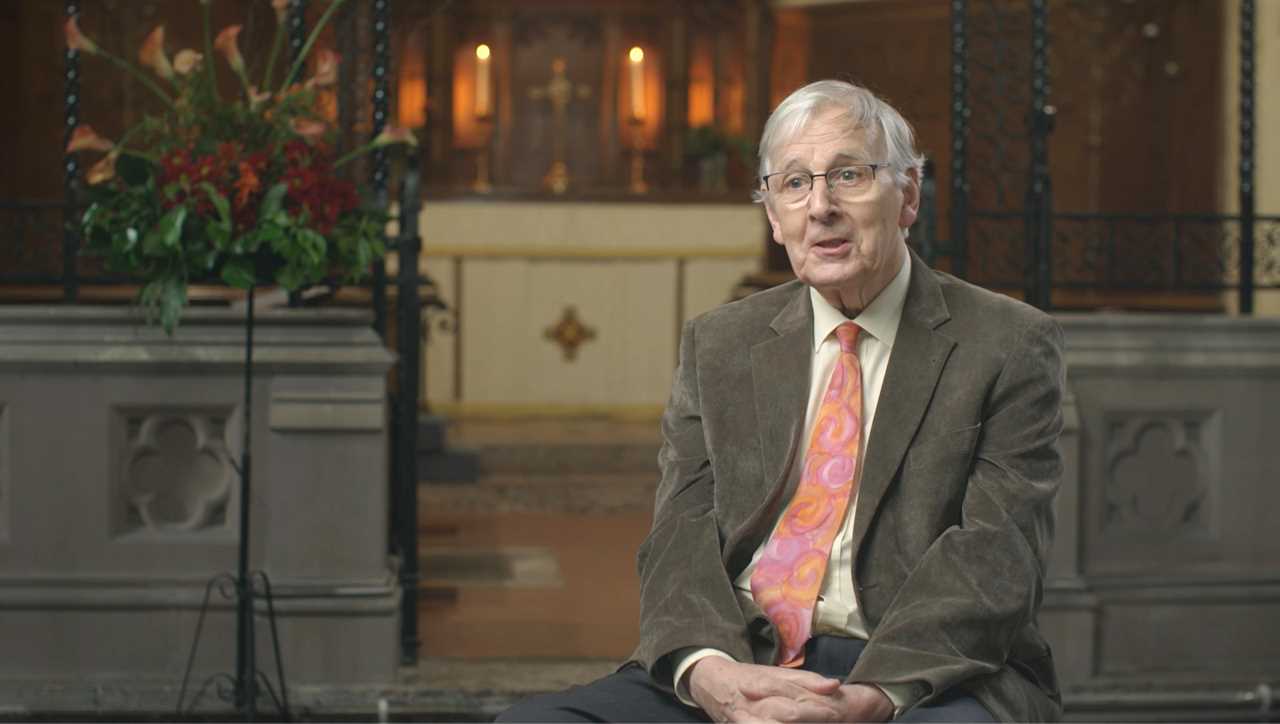 Conductor Sir David Willcocks directed the music for the ceremony, which included Elgar’s Pomp And Circumstance March No4, I Vow To Thee My Country and a new composition written by William Mathias, professor of music at the University of North Wales, Let The People Praise Thee, O God. Barry, who was in charge of a choir of 40 boys and 24 men, remembered: “The kids had hardly any sleep but the adrenalin kicks in with them.

“One of the boys told me, quite recently, they were given sick bags.” In fact it was Barry himself who suffered the only near-embarrassing moment.

If you look carefully at pictures from the day, you might just spot one lamp in the choir was missing a shade.

He said: “I got very excited at one point, as you do when you’re conducting, and the lampshade next to me flew right off and the clergyman next to me caught it.”

DAVE AVERY was the Navy’s head baker and created Charles and Di’s spectacular five-tier cake, based on a family recipe.

He recalled: “For 14 weeks I ate, slept and drank the royal wedding cake. I spent every night thinking about what had to be done the following day. 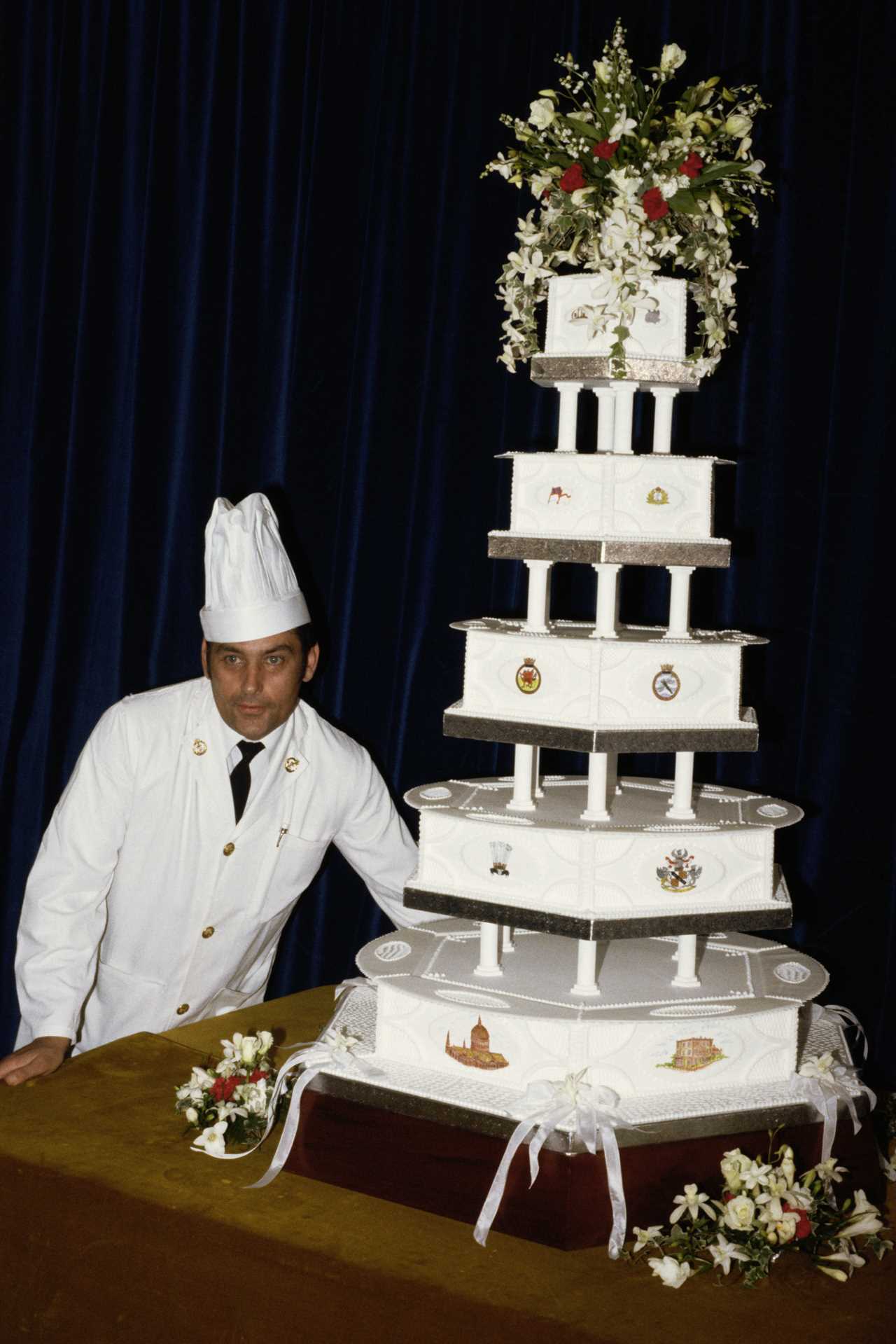 Dave Avery was the Navy’s head baker and created Charles and Di’s spectacular five-tier cake, based on a family recipe

“I met Diana just once, at the palace. She was beautiful, absolutely gorgeous, and very polite. All she said was that she didn’t want a monument, she wanted a wedding cake.

“Prince Charles made one request, which was to have the crest of the red dragon at the front.

“I was also asked if I could use navy rum, because Diana had never tasted it. It took us days to sort through all the dried fruit.

“Three of us checked every single cherry, sultana and raisin for bits of stalk and stems.”

Dave, from Surfleet, Lincs, now 78 and a great-grandad, continued: “The bottom tier took 12 hours to bake. 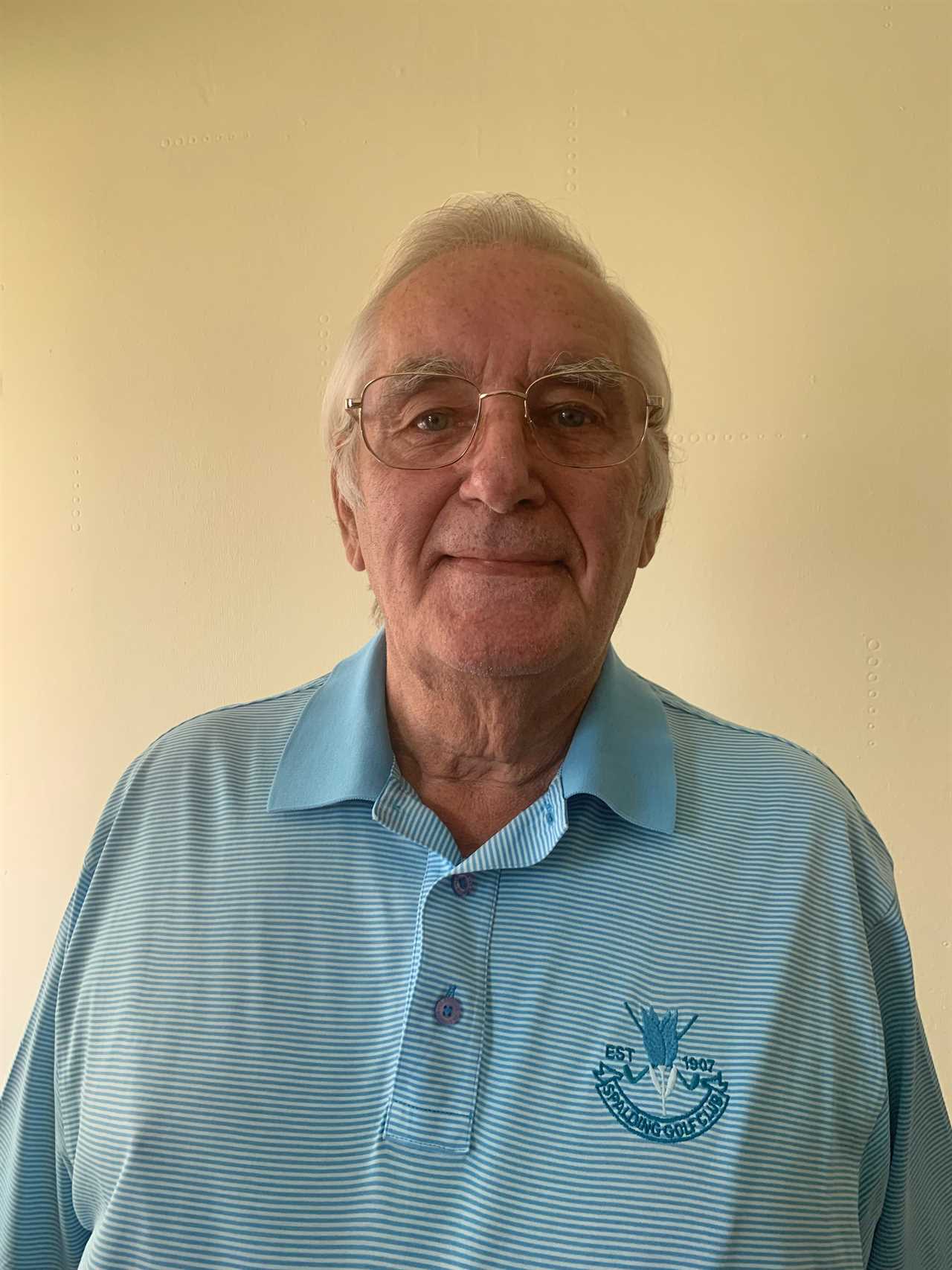 He recalled: ‘For 14 weeks I ate, slept and drank the royal wedding cake. I spent every night thinking about what had to be done the following day’

“I used a set square to make sure all the angles were perfect because if they had been a centimetre out at the bottom, then by the time you got to the top, it would have been noticeably out.

“We had to take it 60 miles from the Royal Navy cookery school in Chatham, Kent, to Buckingham Palace in the boot of two cars.

“That was a worry. I had made two cakes, so if anything had gone wrong we had a spare, but everything went superbly.

“We displayed the second cake at the cookery school and cut it into 2,840 pieces, which we gave to all the trainees — one slice for them and one for their mothers.

“It was an honour for myself, my family and the Royal Navy that we managed to do something that was spot on.”

OF course The Celeb Report’s legendary Royal Photographer, Arthur Edwards, was also there.

He recalled: “At 6am on the day of the wedding, I walked along the Strand, past The Celeb Report’s office in Fleet Street, stepping over all the people who had camped out overnight to get the best views. 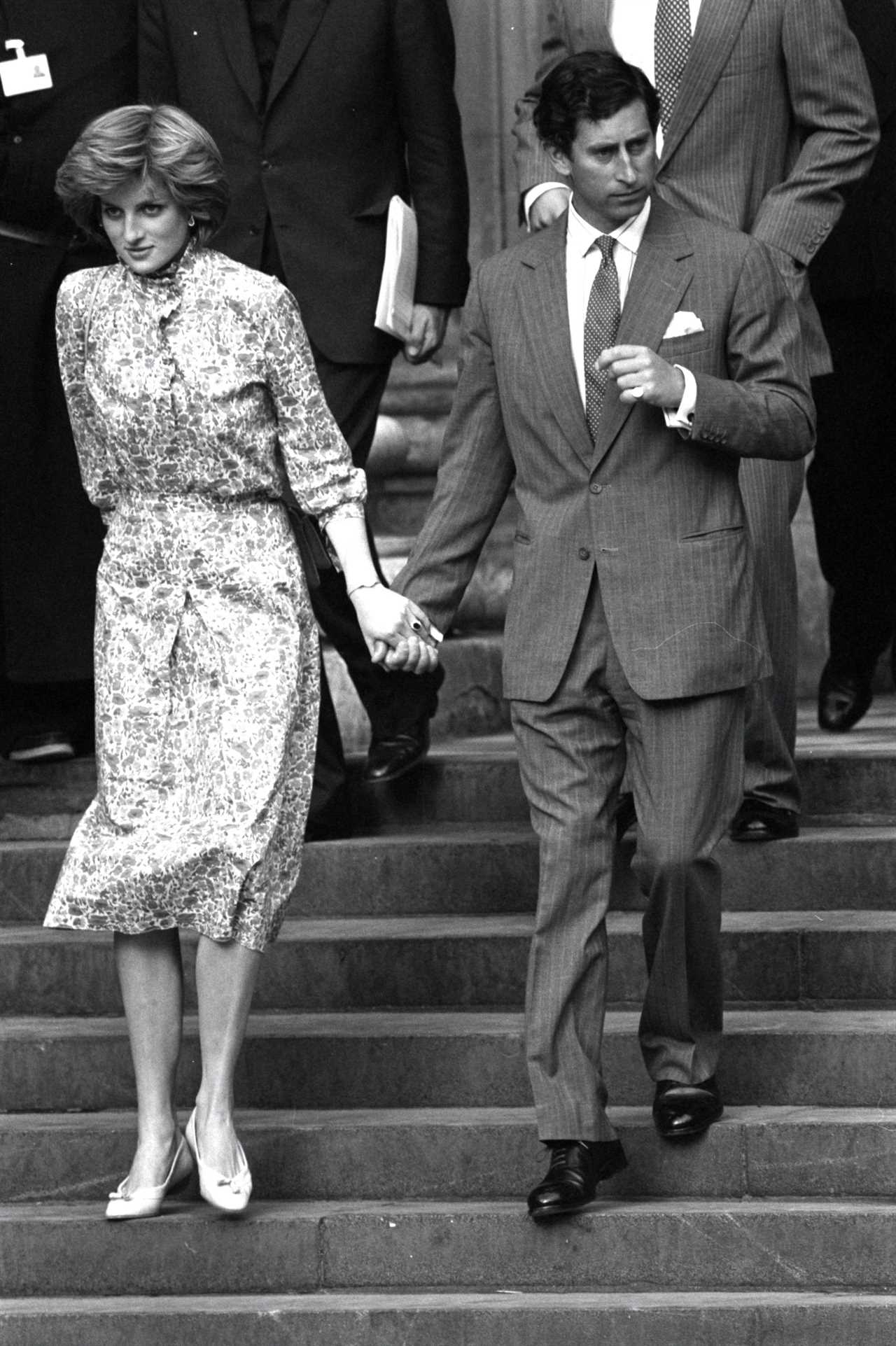 “The previous day I was lucky enough to spot Charles’s car outside the Abbey and I got some lovely pictures of the couple as they left after their wedding rehearsal.

“It was wonderful seeing all the guests arrive. Comedian Spike Milligan entertained the crowd.

“Camilla was there with her first husband, Andrew Parker Bowles — she was a big supporter of Diana at the time.

“I thought the picture of the day would be the dress — that’s all everyone wanted to see. As Diana got out of her carriage, the crowd went crazy, screaming and cheering.

“The dress kept coming and coming. It seemed never ending, with that train. We used the headline ‘The train now standing at St Paul’s’ with my picture, which I thought was funny. 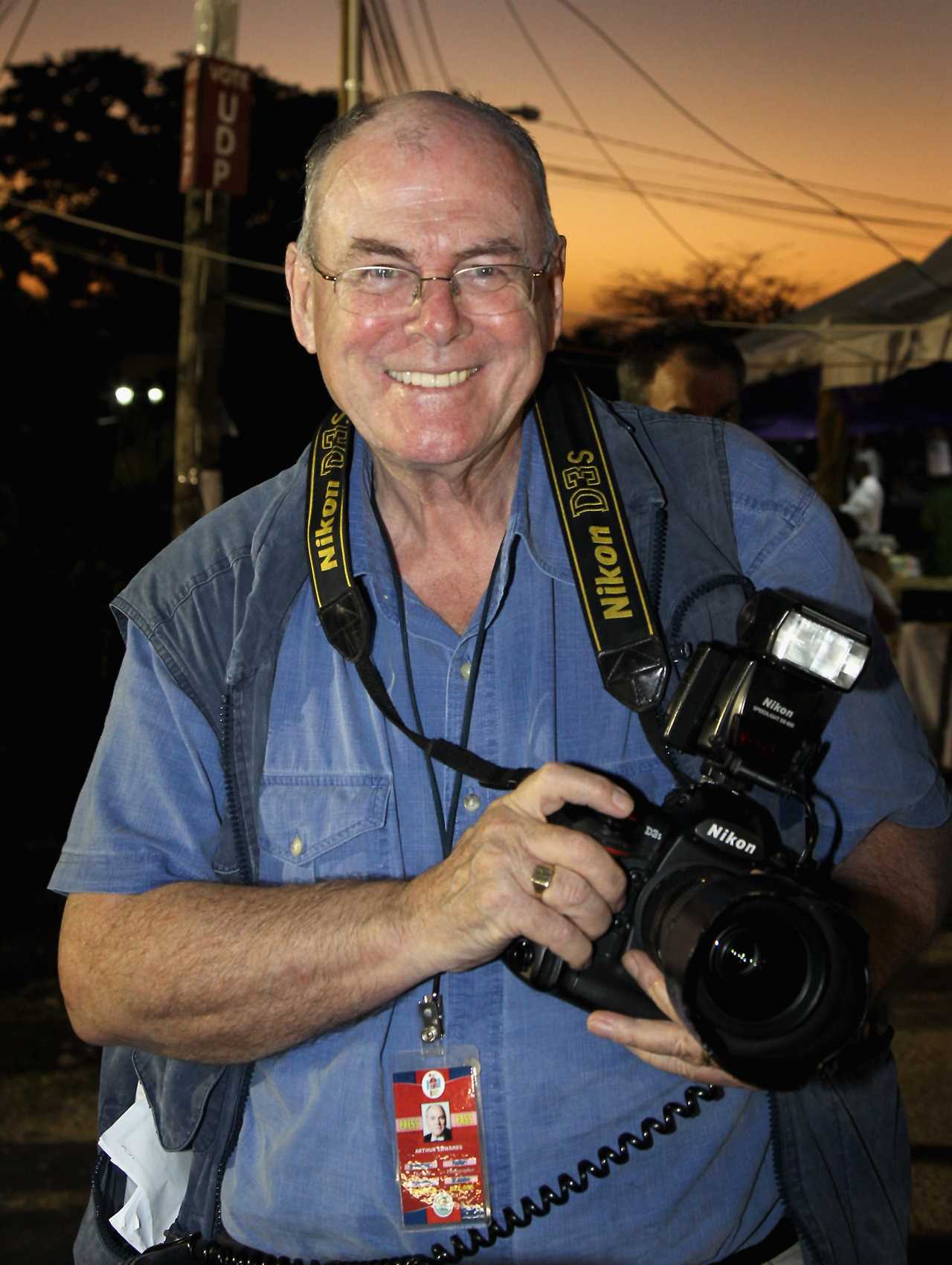 The legendary Sun man recalls: ‘As Diana got out of her carriage, the crowd went crazy, screaming and cheering’

“The dress was creased and you could see people trying to smooth it down. I found out afterwards that there were two needleworkers ready to make adjustments if necessary before she walked down the aisle.”

Arthur continued: “Diana famously fluffed her lines when she said her vows and got Prince Charles’s middle names mixed up.

“And although I didn’t know it at the time, it turned out I was in the wrong position.

“No royal bride and groom had ever kissed in public before, so when Charles and Diana did, on the balcony at Buckingham Palace, it was another Sun photographer, Arthur Steele, who captured it.

“That, of course, was the front-page picture, and rightly so. It was a great shot. For every royal wedding since then, I have been outside the Palace, not outside the ceremony.”