When we dropped out of college to form our band we were dishwashers with no plan B, say The Black Keys

FOR a pair of college dropouts, Dan Auerbach and Pat Carney have done all right.It is 20 years since The Black Keys duo recorded their debut album in ..

FOR a pair of college dropouts, Dan Auerbach and Pat Carney have done all right.

It is 20 years since The Black Keys duo recorded their debut album in a dingy, rat-infested basement in Akron, Ohio. 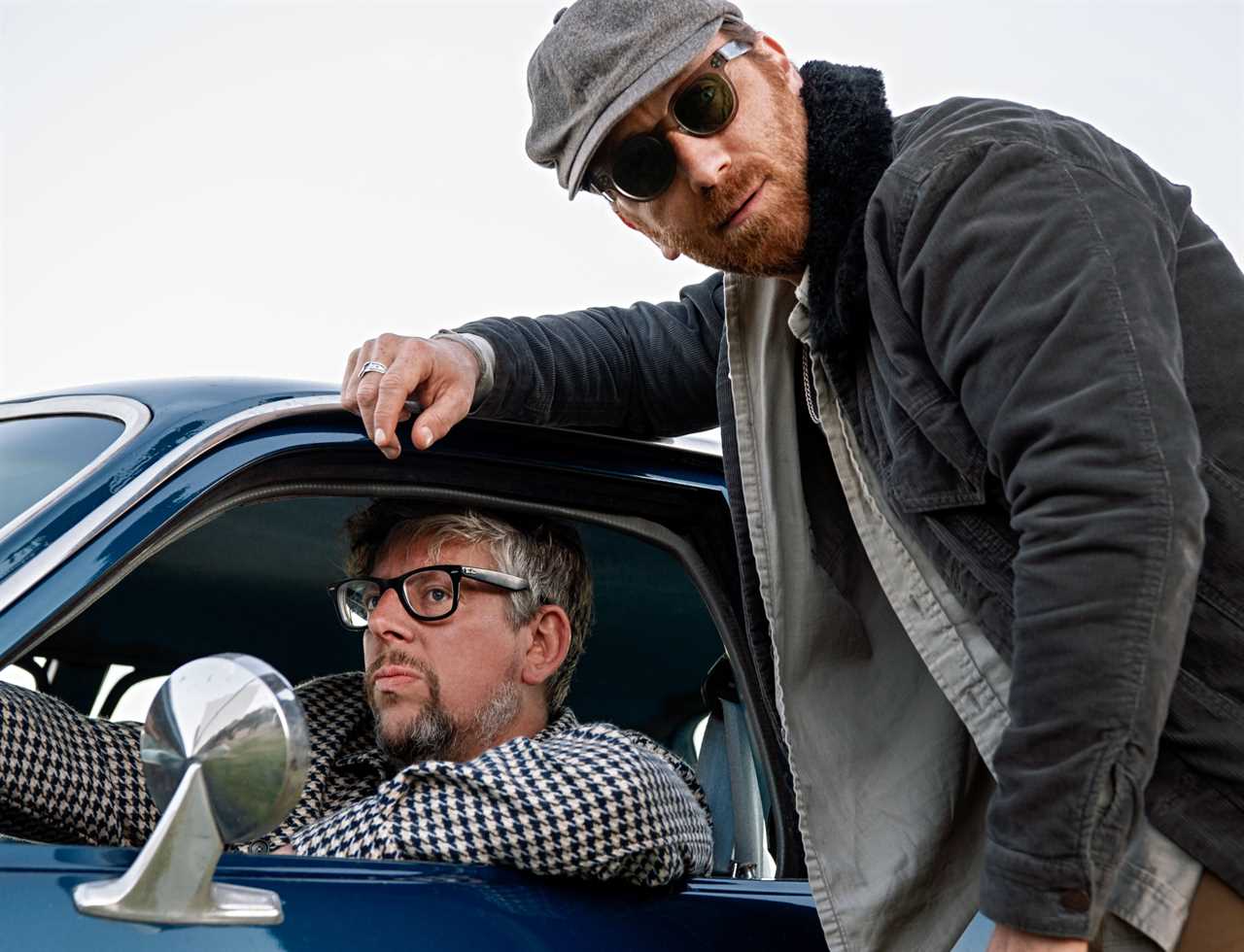 For a pair of college dropouts, Dan Auerbach and Pat Carney have done all right 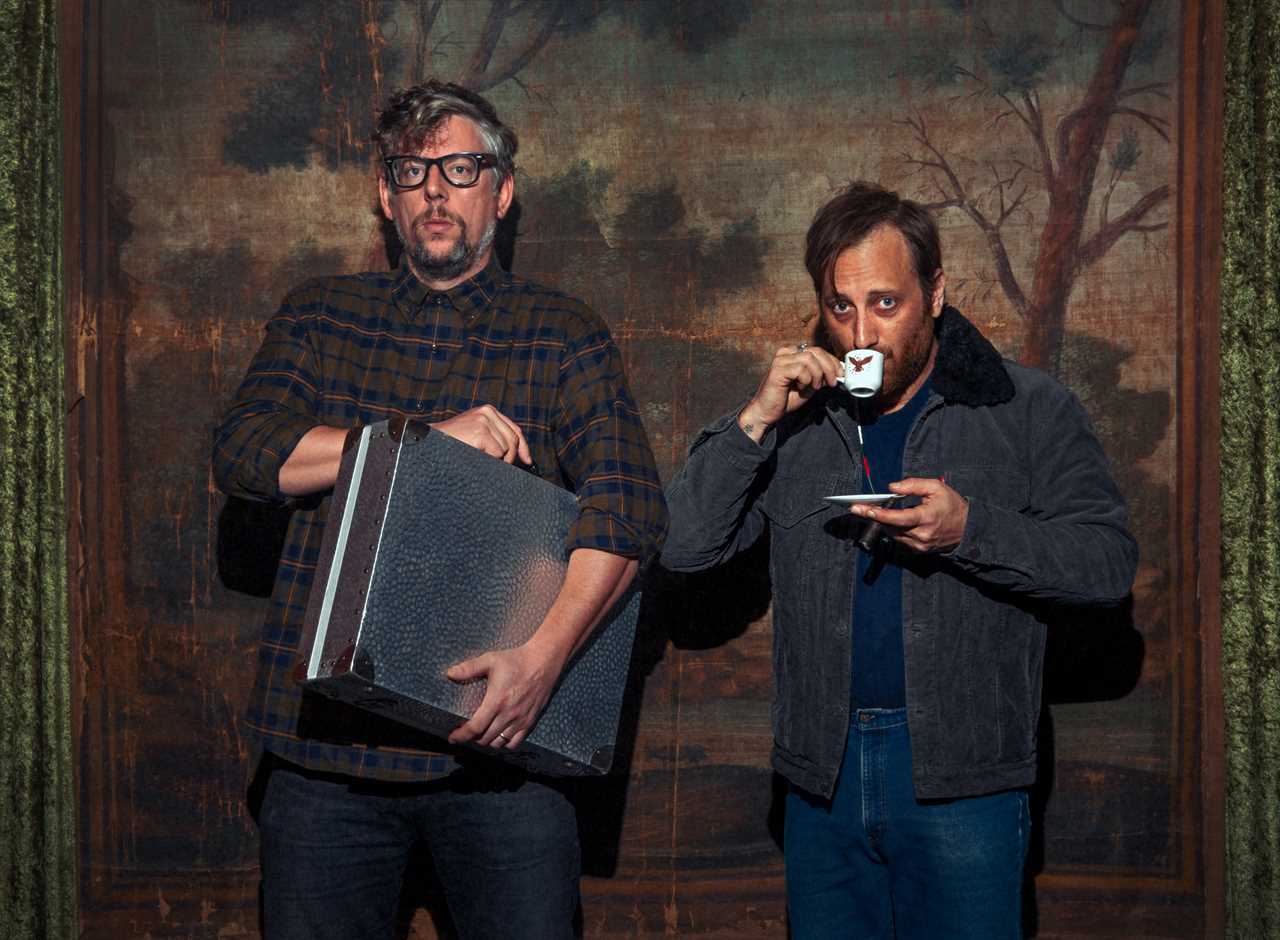 It is 20 years since The Black Keys duo recorded their debut album in a dingy, rat-infested basement in Akron, Ohio


Motivated by a burning desire to “make music”, they abandoned courses at the local university. They had “no plan B”.

Now, as they set off on an arena tour of the US with a string of top ten records behind them, singer/guitarist Auerbach and drummer Carney are recapturing the spirit of their devil-may-care early days.

Their loose and loud new studio effort, Dropout Boogie, pays homage to their younger selves who were low on cash but high on determination.

The album takes its name from a groovy track on Safe As Milk, the 1967 debut LP by growly high priest of the blues, Captain Beefheart.

Speaking from his adopted home town of Nashville, where he runs Easy Eye Sound studio and label, Auerbach says: “Pat and I really were dropouts and we bonded over that record. We must have listened to it a thousand times.”

Friends and neighbours in Akron since they were eight, the pair began playing music together as teenagers and soon shared the dream of a life in rock ’n’ roll.

Auerbach continues: “We must have been 16 or 17, which seems insane when I look back.

“We formed an instant bond. Together, we learned how to make music and how to record it.

“The older I get, the more I appreciate Pat. It’s a real blessing that I still get to play with him.

“Our lives are so f***ing ridiculous but we relate to each other more and more as time passes.”

The hilarious cover photograph for Dropout Boogie is intended to show what might have been had Auerbach and Carney’s ambitions not been fulfilled (except possibly for the big, fat Cuban cigars).

“We’re the janitor and the lunch lady at high school,” affirms the frontman.

You can see them acting out their roles disgracefully in a slapstick video for lead single and opening track Wild Child.

“We’re going to reconnect with our blue collar roots and then we’re out,” Carney tells his bandmate as the funky opening bars kick in.

Though the imaginary school is a riot of disgusting food, stressed-out teachers, playground punch-ups and rampant drug-taking, their hopeless situation isn’t a million miles from the truth.

Auerbach says: “When we left college, I had no plan B and Pat was working in a kitchen as a dishwasher and short order cook.”

The singer himself recalls the time he worked in the parking lot at Blossom Music Center in Cuyahoga Falls, not far from Akron.

“It’s an outdoor music pavilion seating about 15,000 people,” he says. “I used to be one of the kids with a flag waving in the cars.”

In a perfect illustration of his two decades on the up, The Black Keys headline a show at the very same place on September 9.

If their adolescent life outside music was distinctly mundane, that all changed when they met up in Carney’s basement.

“Oh man, it was dingy as hell!’ exclaims Auerbach. “The entire house was filled with dudes doing a lot of drinking.

“I would get there at about 10am and would have to wake up Pat. It was before cell phones so I had to throw rocks at his f***ing window.”

To make matters worse, the place had unwelcome guests of the rodent variety, a fact vividly remembered by Auerbach.

“Every third or fourth day, they’d have to put down rat poison. Then we would find dead rats in the kitchen,” he says.

“But we would clean up, make a pot of coffee and go down into the basement.

“It was a completely unfinished concrete box and that’s where we stayed . . . every single day, all day long.”

‘A LOT OF MISFITS AND ROCK ’N’ ROLL WEIRDOS’

As for the racket they made down there, the two like minds set out to emulate their blues heroes . . . Howlin’ Wolf and Robert Johnson from the humid Mississippi delta, Junior Kimbrough and R L Burnside from the dusty hill country just to the north.

Other influences came into play, too, as Auerbach explains. “I was raised on bluegrass, Motown, Stax and The Beatles.”

As children of the Nineties, he and Carney were also immersed in the music of the day.

“Whenever I went to a school dance, it was all hip hop and R&B, Naughty By Nature and Boyz II Men,” he says.

“And we grew up in north eastern Ohio where rock ’n’ roll music is still so beloved. It’s in the air all the time.

“I always tell people I’ve never owned a Tom Petty record but I know every damn one of his f***ing songs.”

Auerbach has long been aware of his region’s rich rock heritage.

“Iggy and The Stooges were from just up the road (in Ann Arbour). Chrissie Hynde, Lux Interior (The Cramps singer) and Devo all came from Akron,” he says.

“There were a lot of misfits and rock ’n’ roll weirdos and we’ve always taken pride in that.”

He remembers that his and Carney’s impulse to join that list began before they’d even defined their roles in the band.

“Pat would say he wasn’t a drummer when we started,” says Auerbach. “He just had a drum kit and I had a guitar but together we learned slowly.”

Things finally got serious in 2001 when a small Los Angeles indie label, Alive, offered them a contract on the back of a six-song demo of “old blues rip-offs and words made up on the spot”.

The Black Keys saw themselves as “a recording pro-ject”, duly delivering debut album The Big Come Up, but their deal demanded another function expected of any decent performance artists . . . live gigs.

Auerbach says: “We were like, ‘Oh s**t, now we have to play shows’. So we loaded our equipment into Pat’s minivan and drove up to the Beachland Tavern in Cleveland.”

Today, he winces about that first foray before a tiny, unforgiving audience.

“We had 30 minutes of music which we got through in 15. Everything was twice as fast as it was supposed to be.

“Basically, we both blacked out because we were so nervous. Then we went backstage and said to each other, ‘Woah, what just happened?’.

“It’s one thing to be in a basement, on your own with complete anonymity, and completely different to be in front of people. We found that out real quick.”

So did the younger Auerbach ever imagine that the great Black Keys adventure would last more than 20 years?

“No, not at all,” he replies. “But every year, it has just got bigger and a little bit better.

“As time has passed, everything has changed so much, especially our friends and family.”

Both Auerbach and Carney have been divorced but now are happily remarried and both are doting dads.

Let’s forget that they took time out from each other between 2015 and 2018 before reconvening to make the Let’s Rock album.

In 2022, the old buddies are at peace and reinvigorated by their work as The Black Keys.

“Every time Pat and I get back in the studio, we’re like teenagers,” says Auerbach.

“Honestly man, we experience the exact same excitement and curiosity as when we first sat in that basement.”

Their energy and commitment is plain to hear on Dropout Boogie, the ten original songs taking their cue from last year’s raw and rocking album of blues covers, Delta Kream.

Auerbach says: “I don’t know what it is about doing that hill country music but it’s like rebooting your computer.

“We finished Delta Kream, which was such fun and so painless, and then set dates for going back into the studio. It was that simple,”

Coming along for the ride, (well, for a few of the songs at least) were two established musos, Reigning Sound’s Greg Cartwright and Angelo Petraglia, best known for his work with Kings Of Leon.

“Peppering in that little bit of co-writing was very beneficial,” maintains Auerbach.

“Greg’s a song master, a complete music obsessive who doesn’t go anywhere without a box of 45s. That energy mixed with Pat and I got s**t moving in the right direction.

“Same with Angelo, he’s a guy we met in Nashville, a great guitar player and a cool dude.” This brings us to Dropout Boogie’s VIP guest, Billy F. Gibbons, the bearded, guitar-toting ZZ Top legend, who adds trademark licks to Good Love.

Auerbach is still pinching himself about the blues-rock maestro’s appearance.

“I heard Billy was in town, so I texted him to see if he fancied dropping by the studio if he had any free time,” he says. “I told him Pat and I were recording and that he should come and hang out. And he f***ing did!

“He brought a bottle of red wine, so we opened it, handed him a guitar, and started playing for an hour and a half non-stop. One of the songs we improvised was Good Love.”

The tale doesn’t end there because the guitar was once owned by another of Auerbach’s hill country heroes, Mississippi Fred McDowell.

“McDowell’s wife glued little jewels all over it so it’s got a lot of soul. I just plugged Billy straight into a guitar amp, turned it all the way up.

“It was instantaneous ZZ Top right there. He doesn’t need anything special to make his sound, not even his own guitar.”

Elsewhere on Dropout Boogie, careful attention has been paid to “shades of light and dark”.

How Long, which Auerbach describes as a “pretty ballad” is followed by Burn The Damn Thing Down, “a raw, one-take” number complete with searing guitar solo.

Talking to this passionate musician, it’s clear   that he’s in a good place.

He puts part of it down to his surroundings: “Nashville is unique. It’s full of people who dedicate their entire lives to music.

“There’s no other place for me,” he adds before listing a couple of his other projects . . . producing a new record by Hank Williams Jr, son of the great country pioneer and releasing lost tapes by another of his blues heroes, Son House.

With the Covid restrictions mostly over, The Black Keys are looking forward to a busy year back on the road.

“We’re very excited to get out and do some shows, can’t wait,” enthuses Auerbach.

“The time away has been amazing, though. It allowed us to do a lot of studio work and we took full advantage.”

He adds with an infectious cackle: “And Pat started golfing. He’s a golfer now!”

Are you tempted to take it up as well? I venture. “Well, he bought me a set a clubs five months ago but I haven’t had time yet,” he answers.

“But Pat’s obsessed. I think he looks at our tour as half playing shows and half playing golf at different courses around the globe.”

The dropouts really have come a long way from that dingy basement.

But they still know how to boogie and, in golfer Carney’s case, bogey. 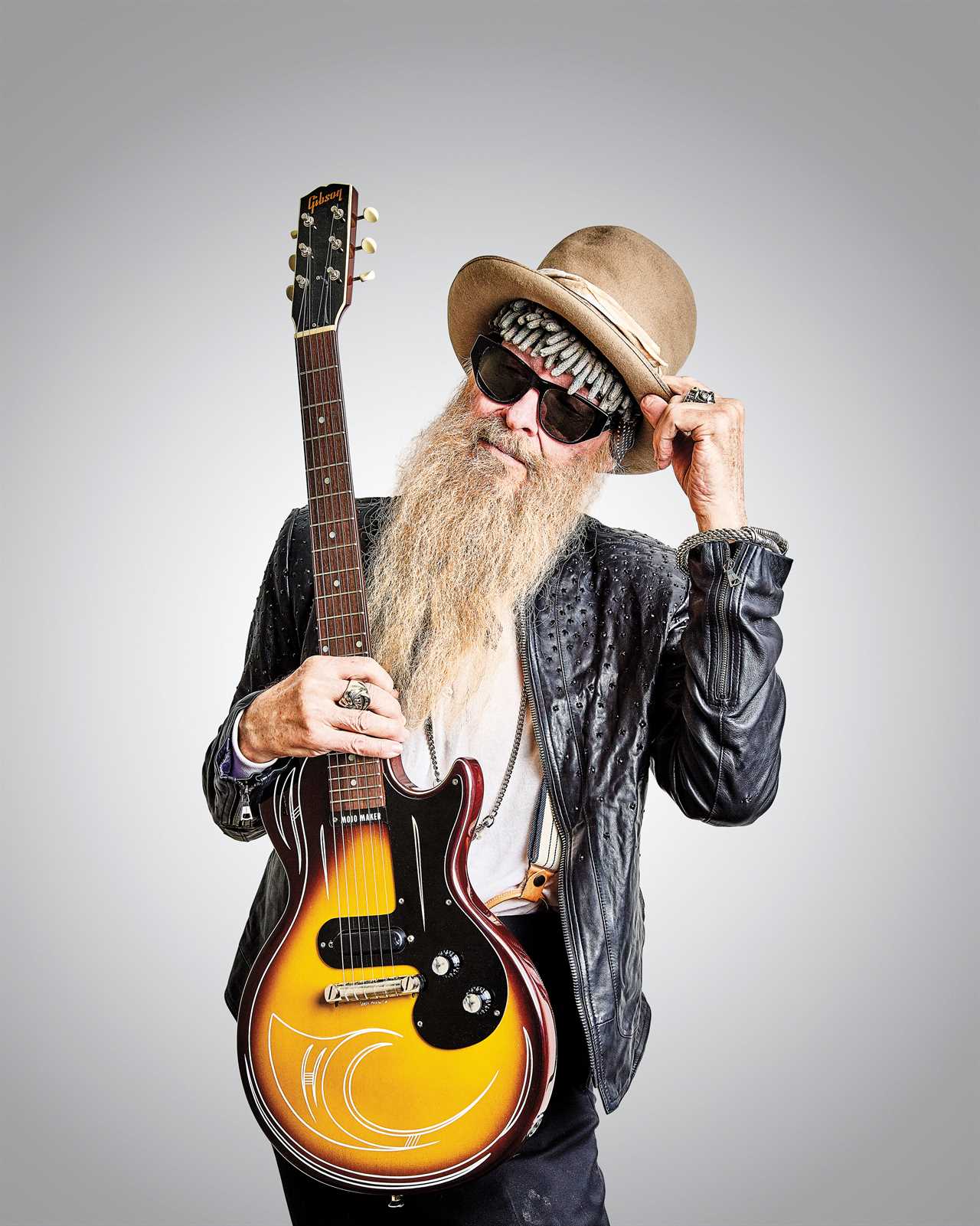