PLAYFUL Princess Charlotte stole the show yesterday as she joined her parents at the Commonwealth Games.The cute royal, seven, put on an animated..

PLAYFUL Princess Charlotte stole the show yesterday as she joined her parents at the Commonwealth Games.

The cute royal, seven, put on an animated performance as she watched the swimming events at the Sandwell Aquatic Centre in Birmingham. 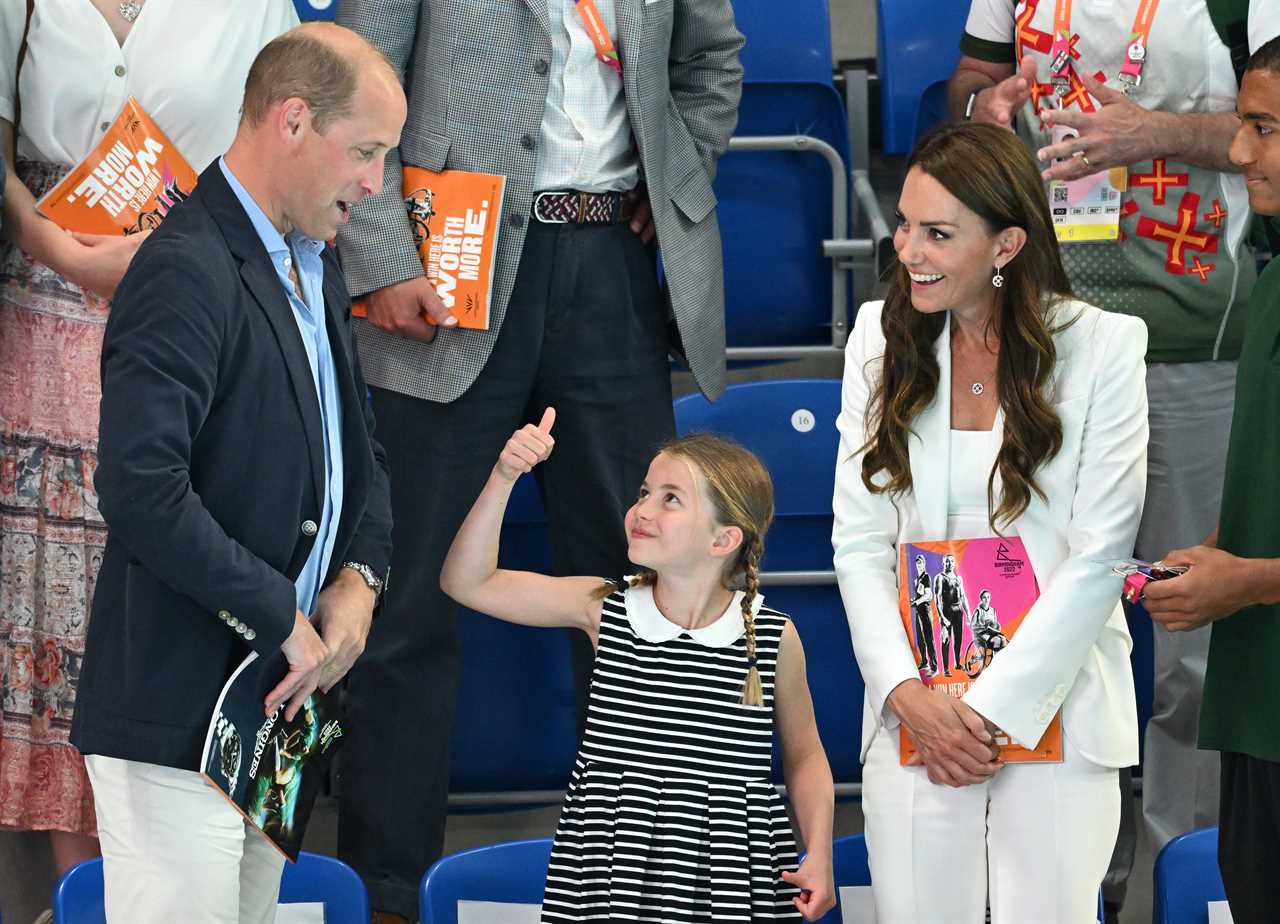 Princess Charlotte put on an animated display at the Commonwealth Games 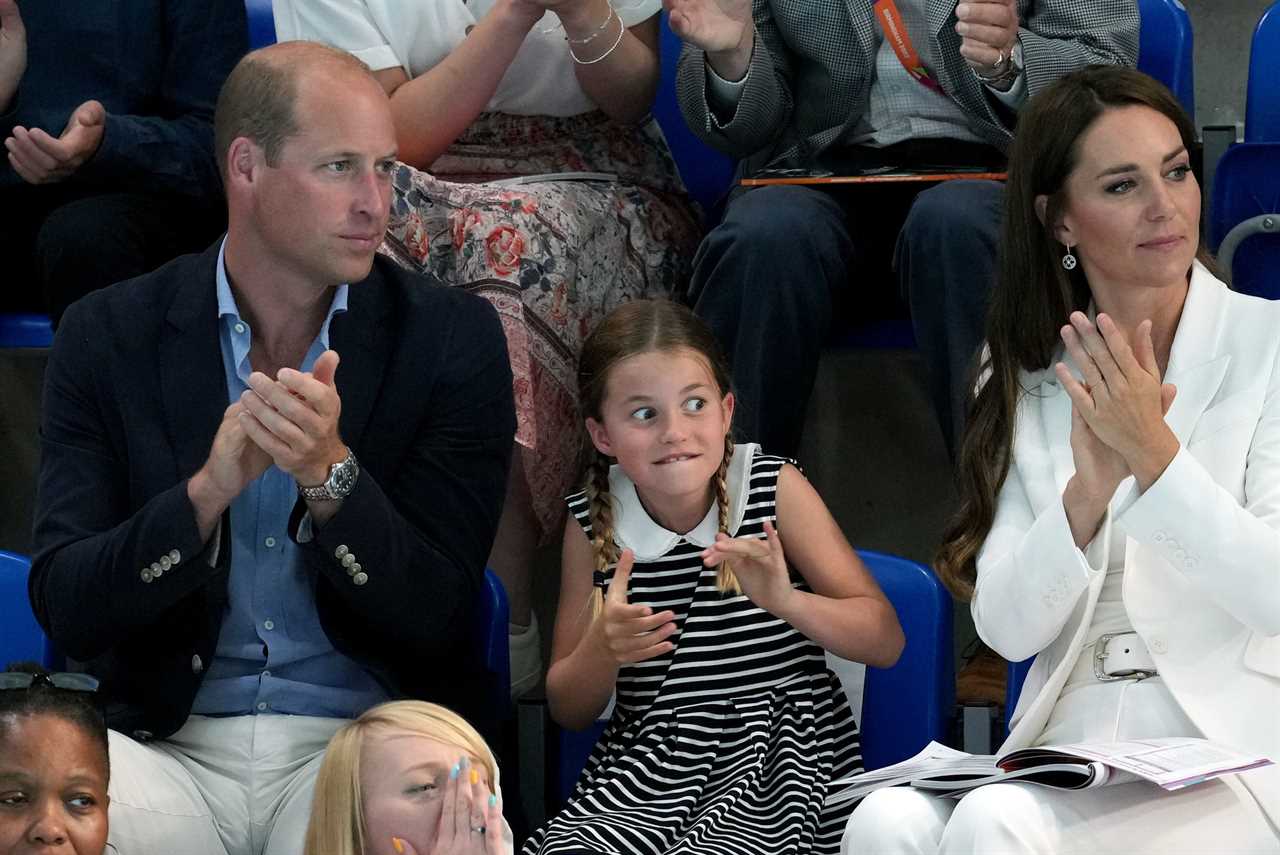 Meanwhile mum Kate Middleton, 40, dressed in a chic white suit, looked relaxed as she chatted away to her daughter in the stands.

Body language expert Judi James says we saw a different side to Charlotte at the Games compared to during the Queen’s Platinum Jubilee, which offered an insight into the kind of royal she’s growing up to be.

She explains: “We saw a lot of Kate and William’s three children during the Jubilee period, but Charlotte was either acting as school prefect to her older brother Prince George, correcting his pose as they stood on the balcony, or being upstaged by her very active younger brother Prince Louis.

“Appearing by herself here, we can see so many signals of both growing confidence and a sense of fun, and a talent for spontaneity and face-pulling that might even eclipse little Louis. 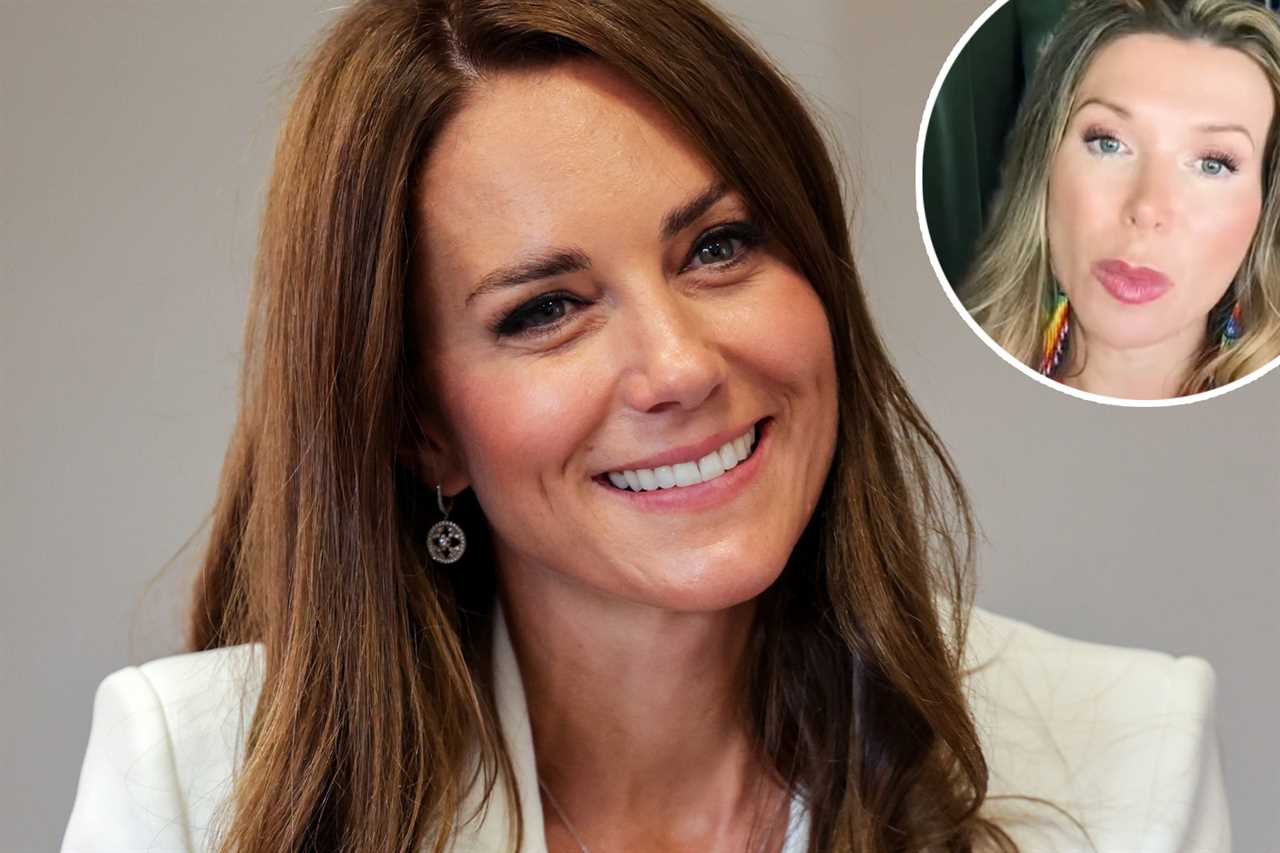 I’m a stylist, the trick Kate Middleton uses to look flawless in every pic 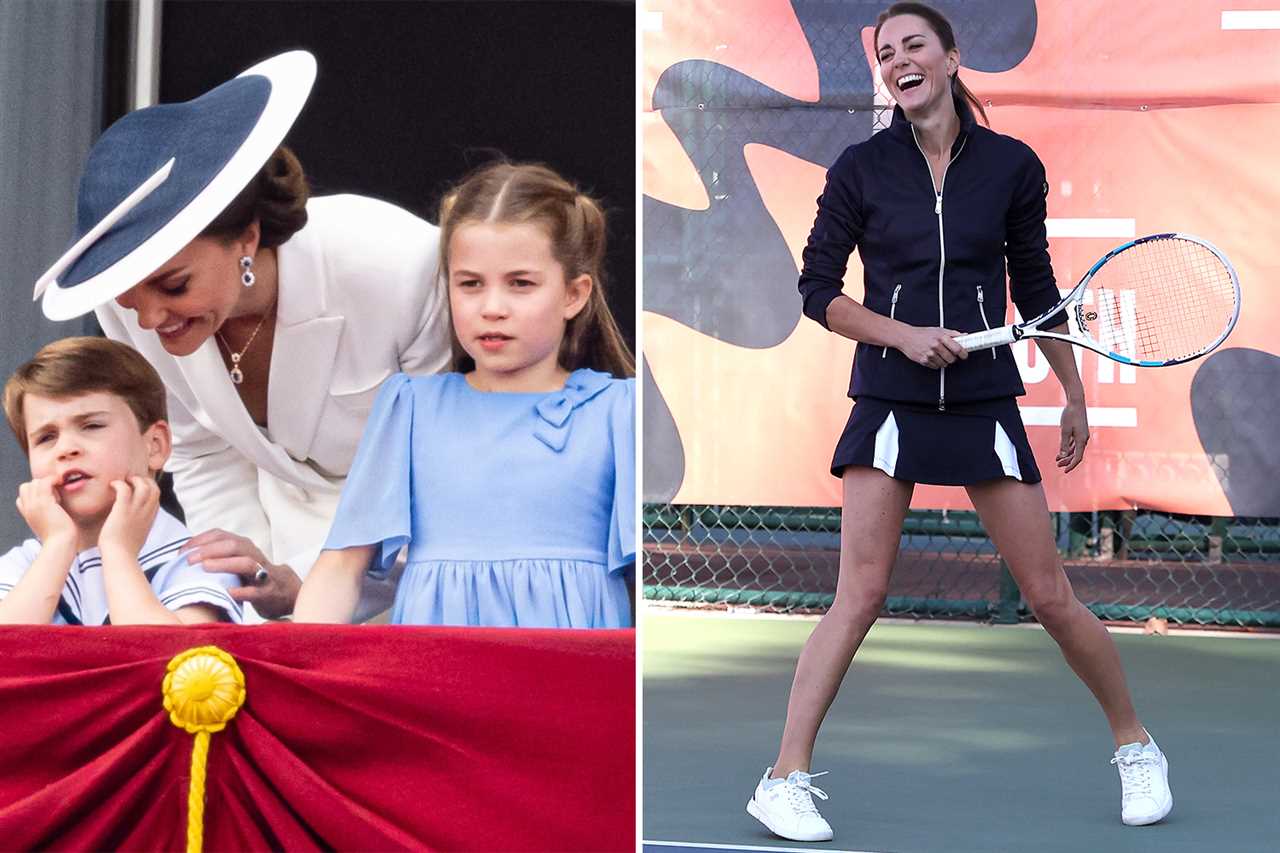 “We can also see her relationships with her parents and a growing sense of her royal profile and the kind of princess she might finally be.”

While Charlotte’s body language displayed some traits of “shyness and initial caution” when she arrived for the very public occasion, Judi says that soon melted away.

She observes: “Holding Kate’s hand, Charlotte seems to nestle in close, and during some of her earlier greetings we can see Kate extending one protective and encouraging hand to nudge her daughter towards a handshake.

“Kate is also still on hand to provide some reassuring, nurturing rituals, like the loving hair stroke to push her hair back into place.” 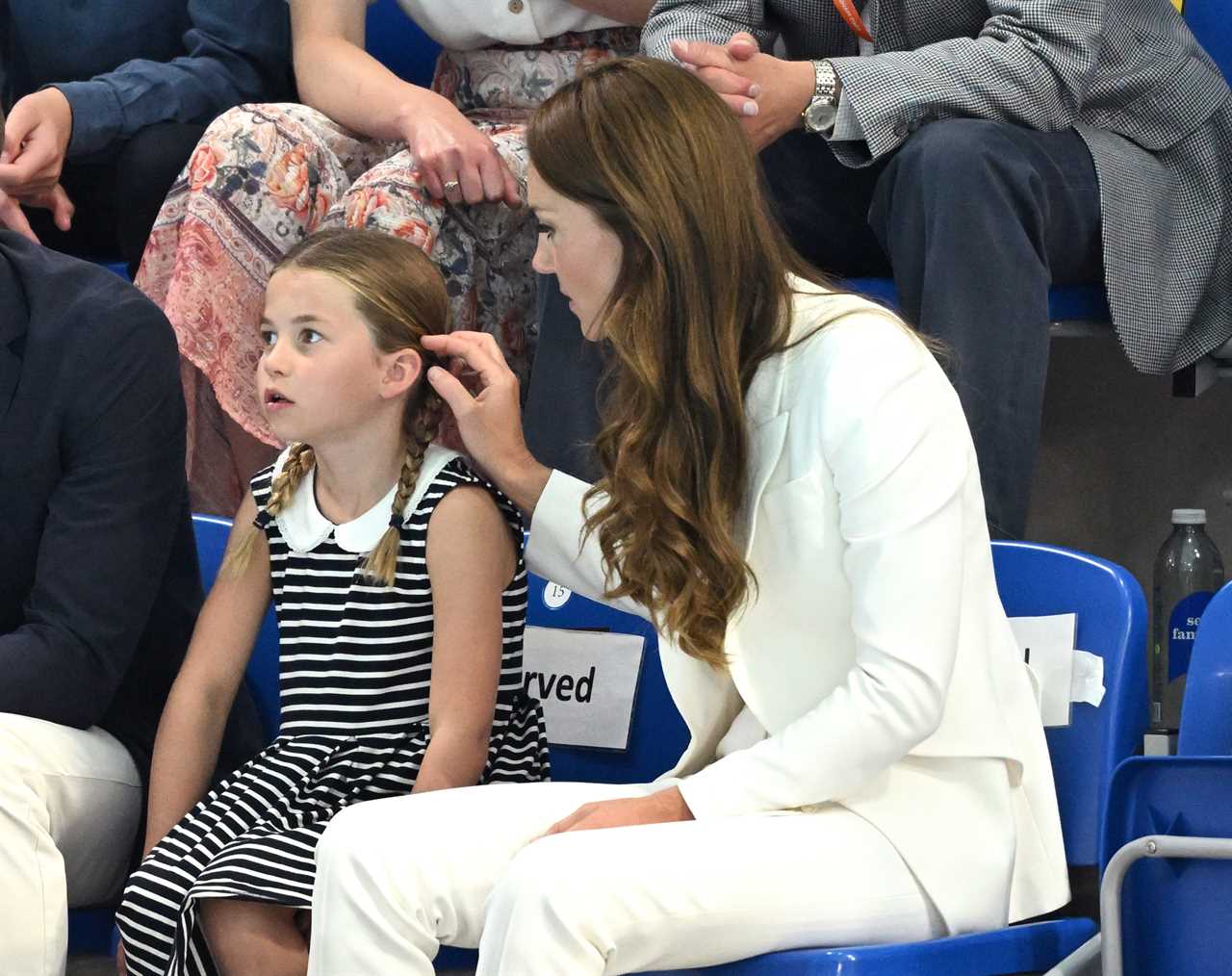 Kate protectively tucked her daughter’s hair behind her ear

Charlotte’s signals of “increased confidence” began to be displayed when she led her mum to their seats, in what Judi suggests looked like a “gesture of an ongoing exchange of power”.

She adds: “During the Jubilee Parade it was George nudging his dad to stand as the carriage went by.

“It looks as though Charlotte is now feeling confident enough to walk ahead of and lead her mother, rather than the other way round.” 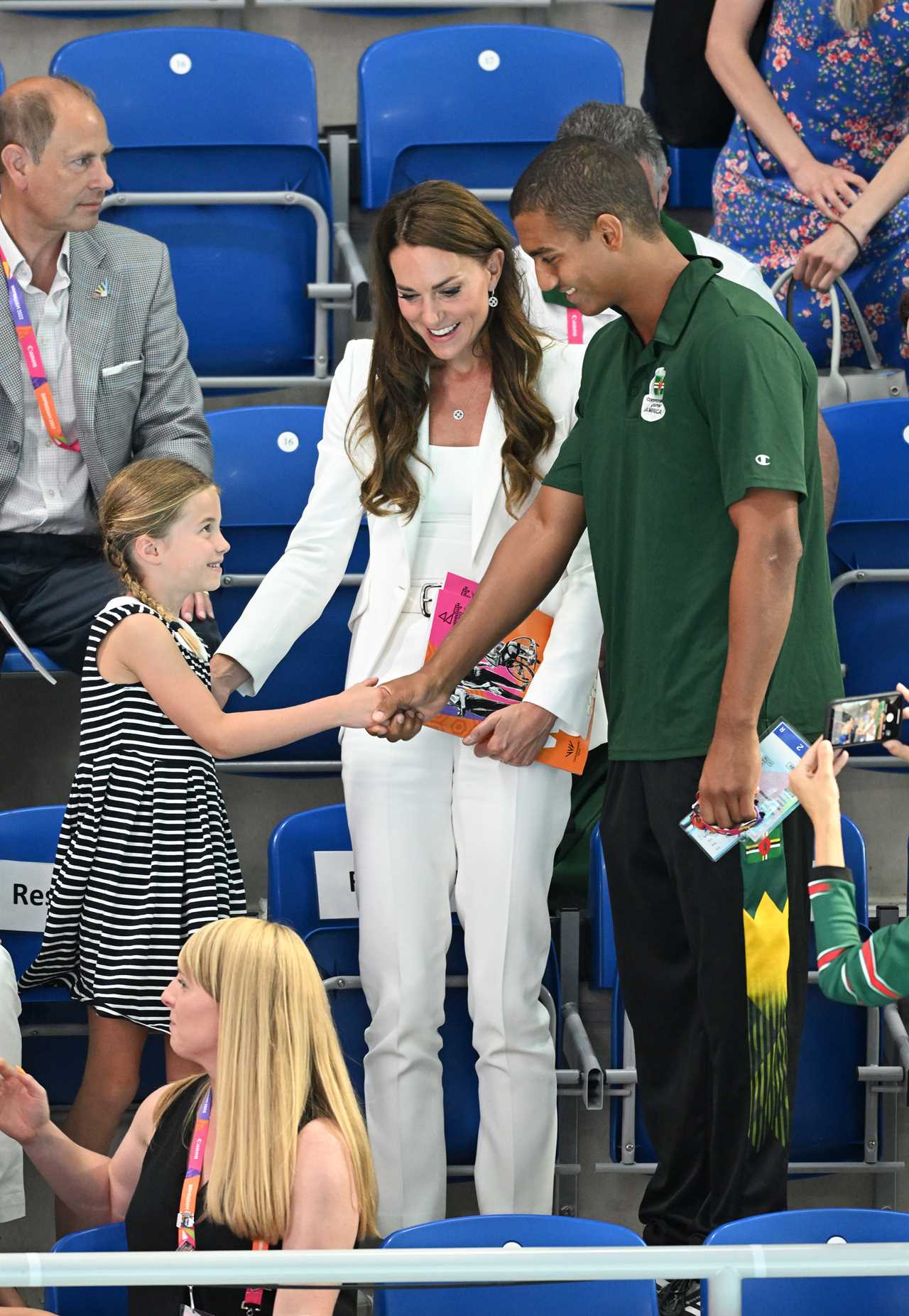 Judi also spotted hints that Charlotte is using the Queen as her “body language role model”.

Discussing the moment Charlotte shook the hand of Dominica swimmer Warren Lawrence, she says: “We’ve seen her shaking hands in a very royal meet and greet ritual before, but she has often needed a little nudging to do so.

“Here though she looks quite keen to shake hands and is actually enjoying the process.

“Her arm is held up at a very assured angle and she uses eye contact and an eye smile as she performs a pretty convincing ‘social’ mouth smile.

“The angle of her hand and her facial expression are so similar to the Queen’s there is a hint she might have been using ‘Gan Gan’ as her body language role model.” 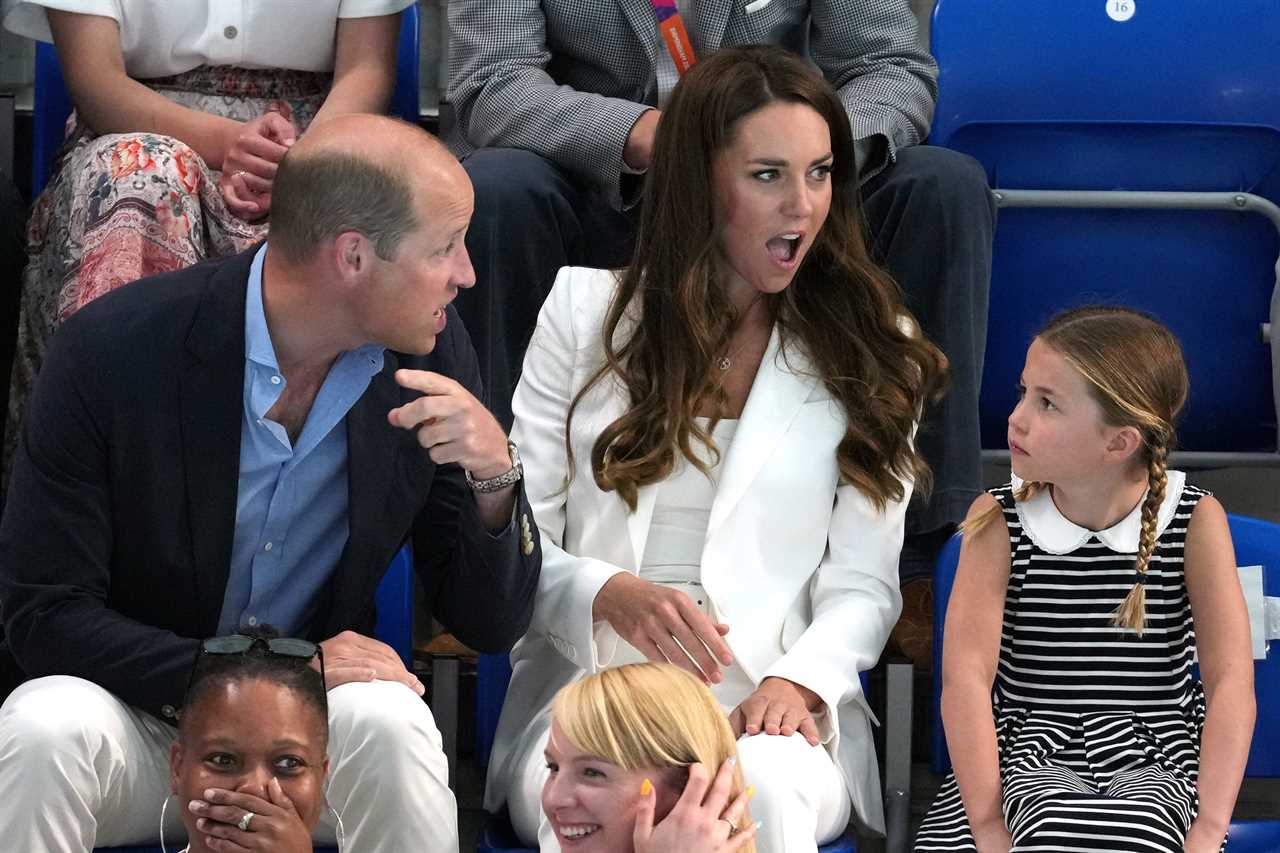 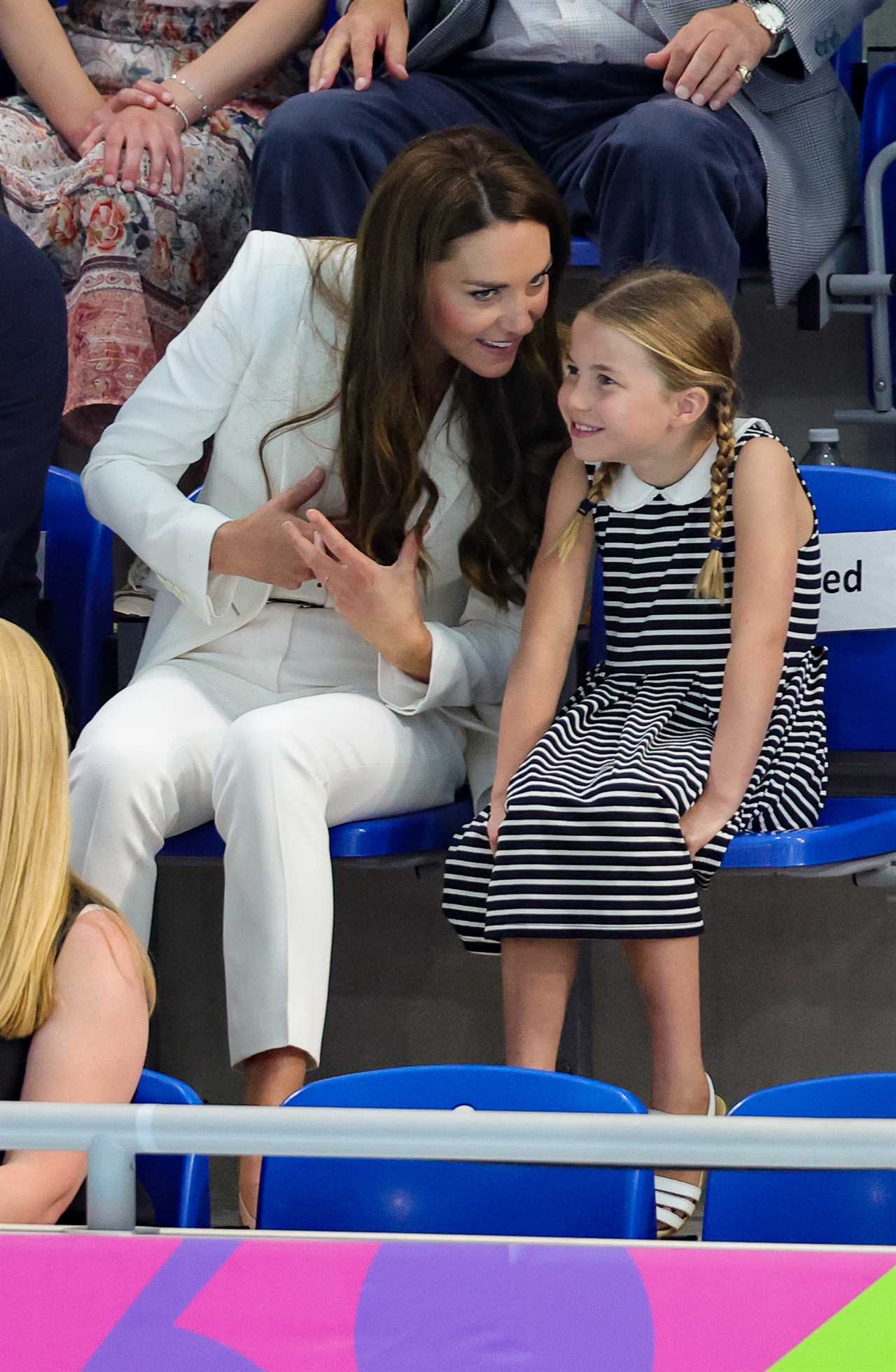 Judi also notes subtle changes in the Duchess of Cambridge, who at times “mirrored” her daughter.

She says: “Kate is known for her smile and laughter in public, but these poses show her looking a lot more spontaneous.

“At one point she sits open-mouthed in what looks like playful shock or indignation.

“Kate appears to be taking her lead from Charlotte and mirroring her slightly, which clearly shows they are sharing the fun and losing themselves in the moment.

“Charlotte’s dramatic facial expressions that include sticking out her tongue, widening her eyes and looking totally engrossed show an immersion that could only come from a lack of shyness and self-awareness.

“It is so good to see Kate following suit, even in a more subtle way.” 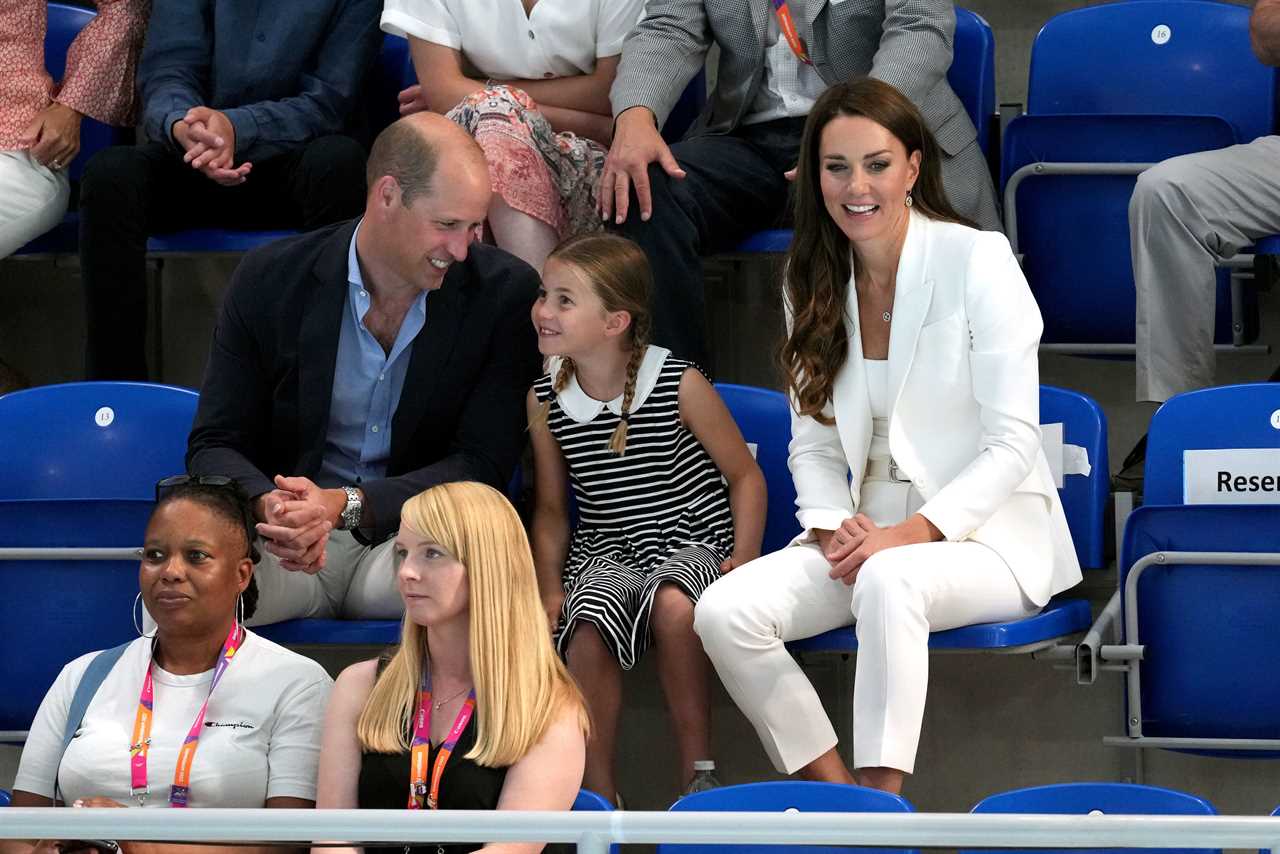 Judi says William also seems “totally happy” to lower his status and confidence signals to raise his daughter’s and allow her some of the “power” in the relationship.

She explains: “It was Charlotte finishing and closing their good luck video to the England Women’s Football team prior to the Euros Final.

“Here we see William standing in a more passive pose with his hands clasped in front and an expression of mock shock as Charlotte performs a very emphatic and confident ‘thumbs up’ signal at him.

“By making her dad laugh like this, Charlotte should feel more assertive and grown-up. 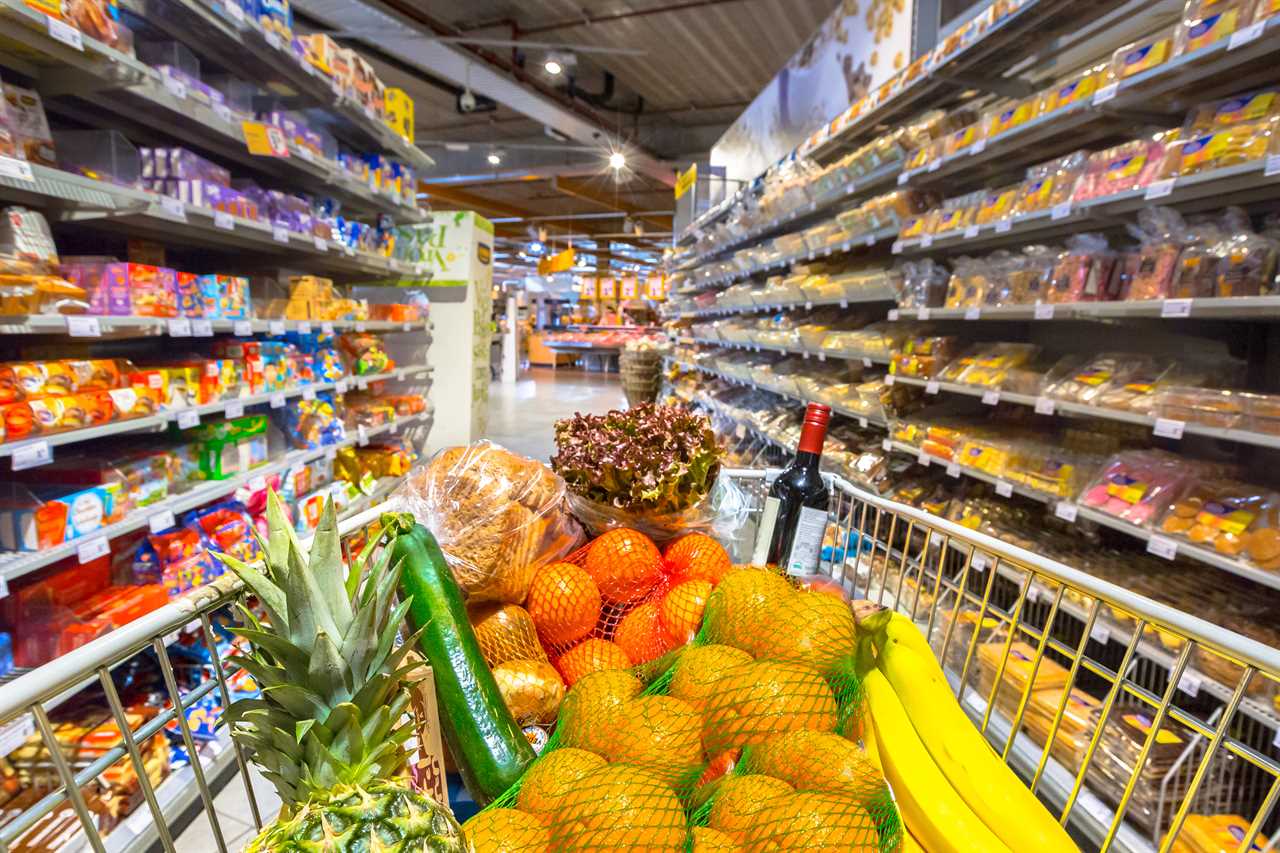 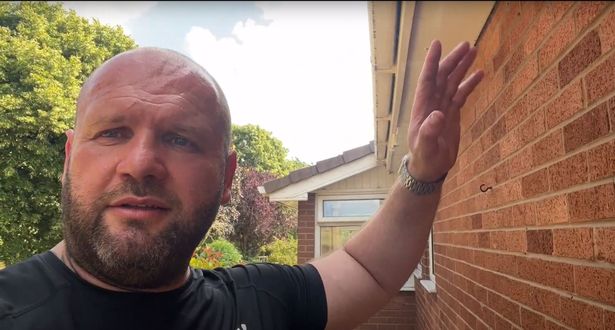 She adds: “William’s puckered and part-suppressed smile of utter pride as he looks at his daughter here is only nearly matched by Kate’s wide beam from the other side.

“We have seen Charlotte being mentored by her mum before, but this is the first outing where we can really see the bond between father and daughter.” 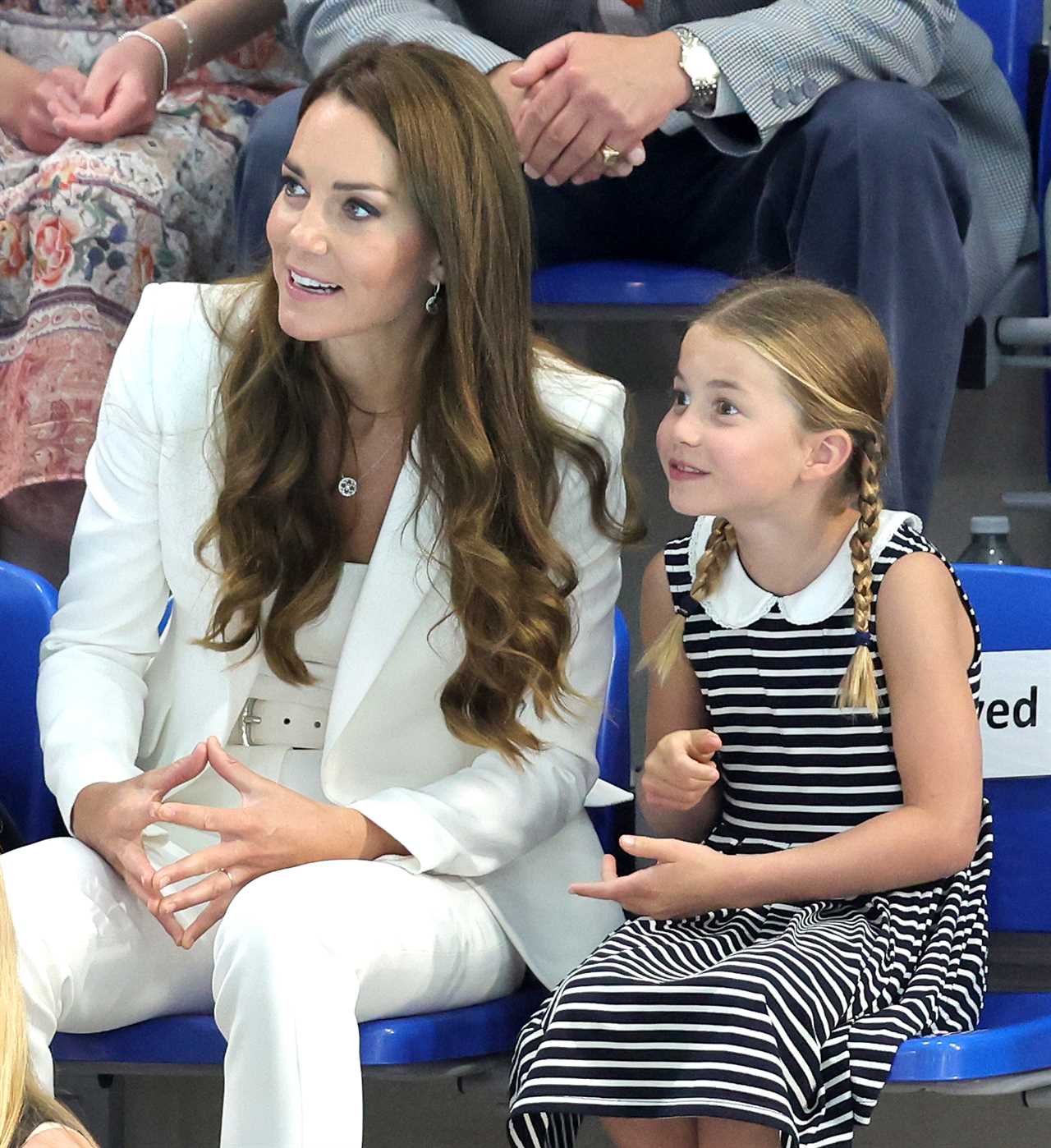 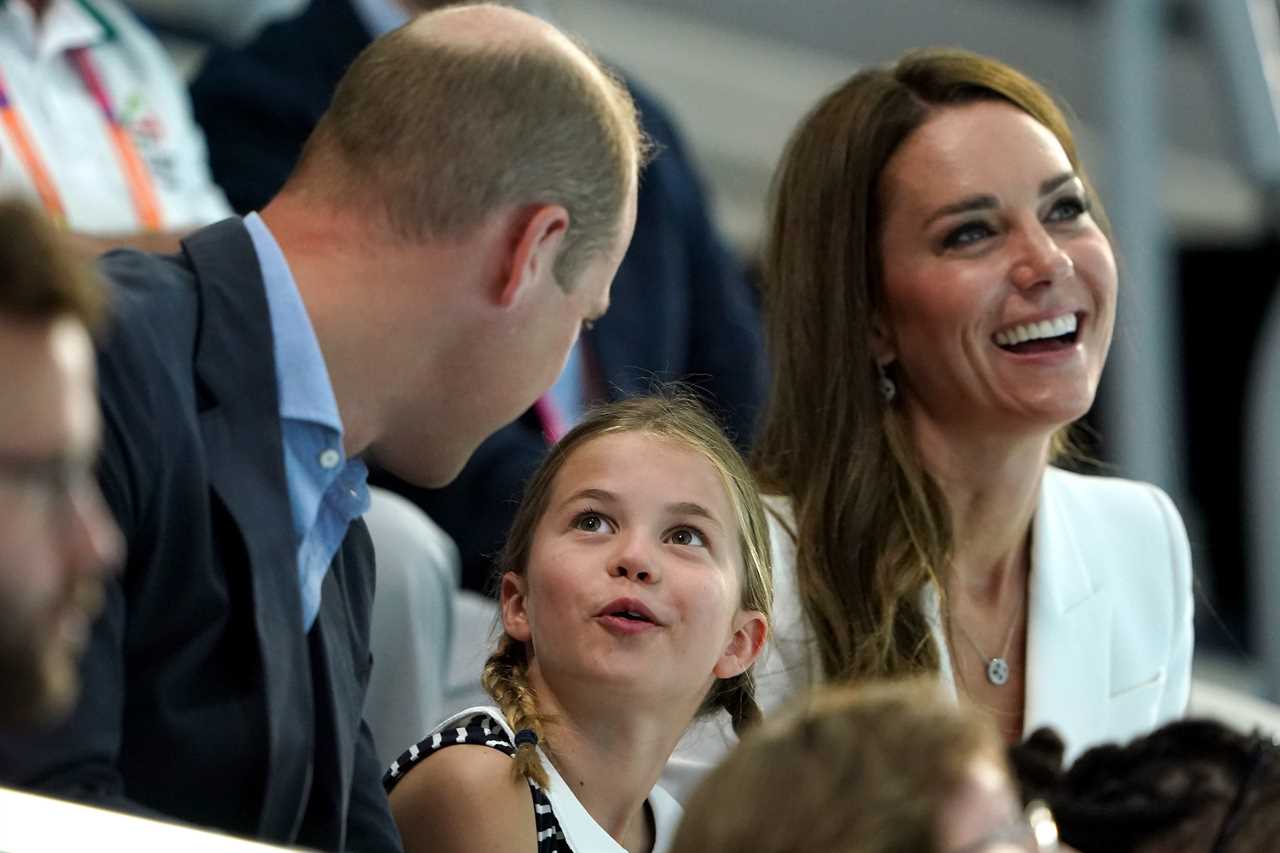 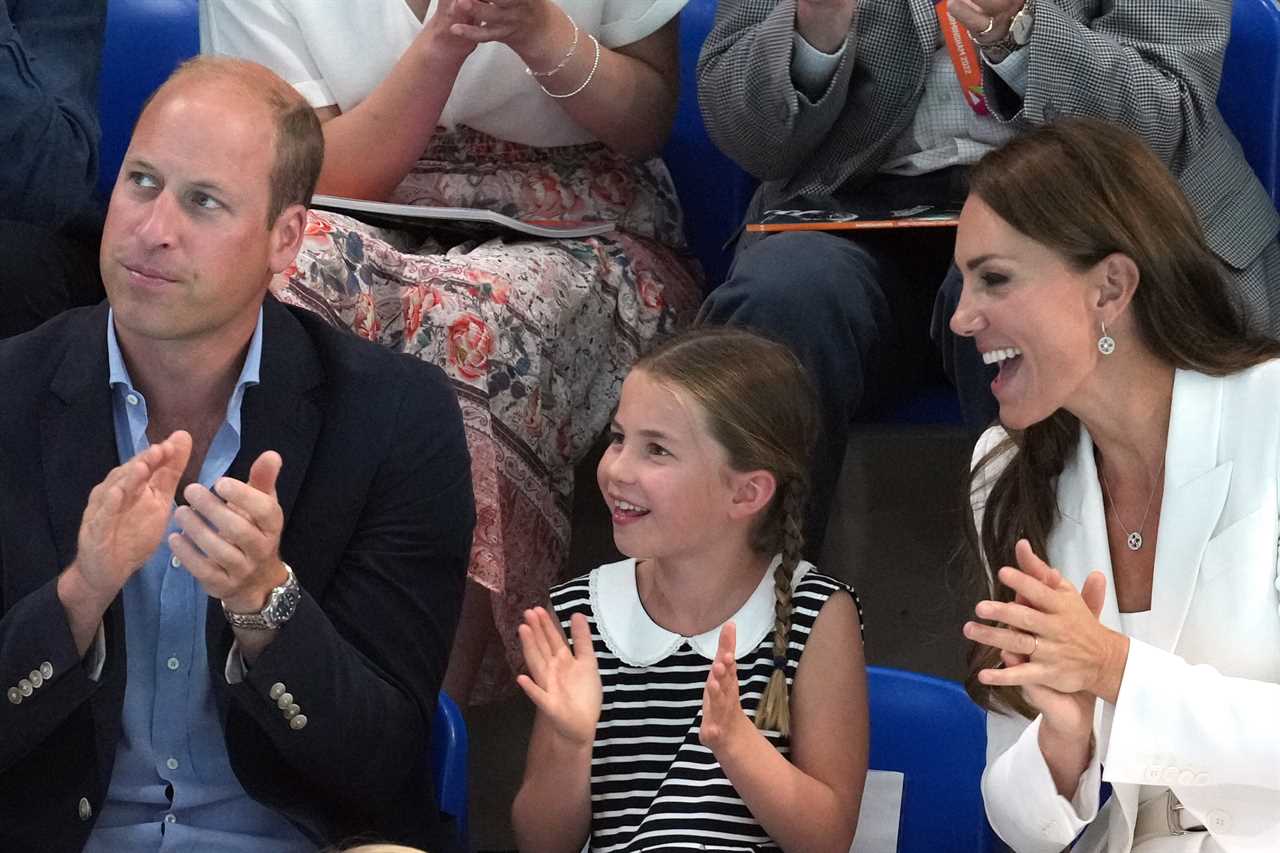 The trio looked to be enjoying the day