KHLOE Kardashian has shared a series of sweet pics of her daughter True, leaving fans baffled by a strange detail in the background.Fans flocked to..

KHLOE Kardashian has shared a series of sweet pics of her daughter True, leaving fans baffled by a strange detail in the background.

Fans flocked to the comments to weigh in. 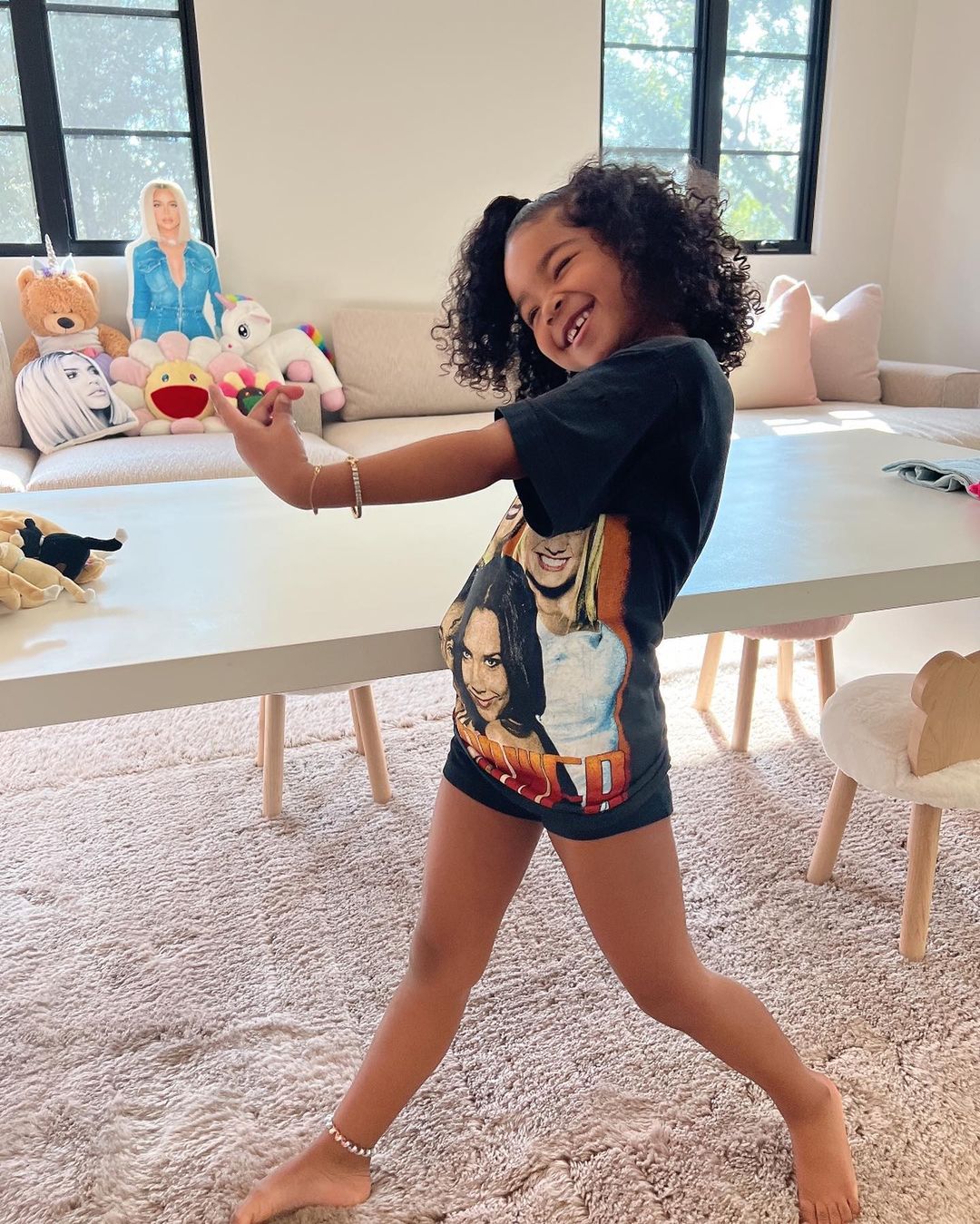 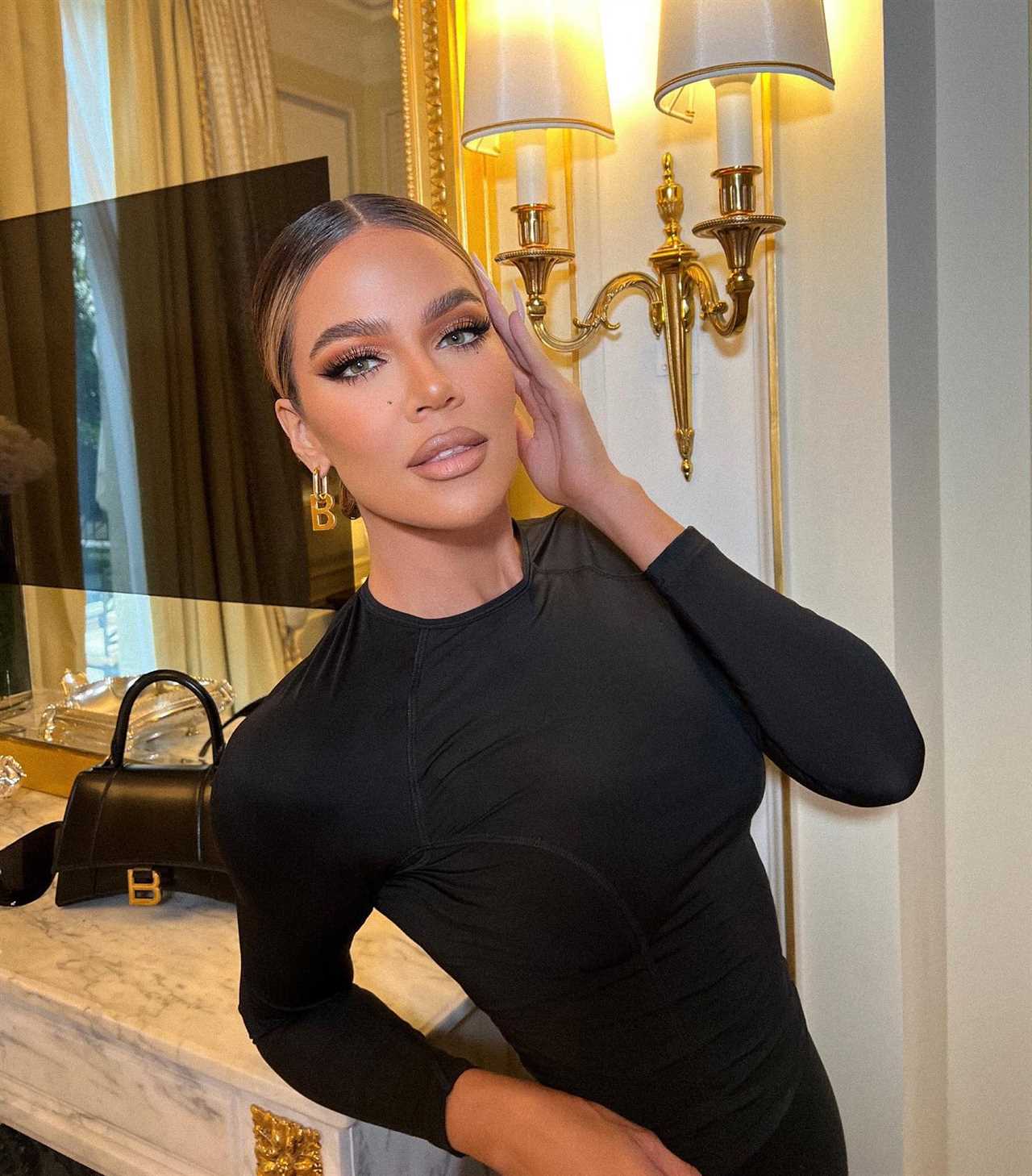 In the first photo, True, 4, posed in a spice girls T-shirt and a pair of black shorts.

She smiled at the camera and leaned slightly on a table behind her.

A second photo showed her striking a pose and drew more attention to the strange detail – an almost life-size stuffed version of the Good American founder and another pillow of her head.

One commenter wrote: “It’s the iconic pillows in the back for me.”

Others focused on True, writing: “Look how pretty and happy she is. You’re doing great, mama.”

Khloe has been showing off her kids – including her newborn son – more as of late.

While celebrating Thanksgiving with her family, the Kardashians star shared a photo of her baby boy.

Momager Kris Jenner hosted an extravagant dinner at her $12 million mansion featuring a grand dining table, a grazing table, and a doughnut bar.

As well as filling her home with an array of flowers and candles, the 67-year-old star also had personal portraits created for every guest and hung them on a wall behind the dining table.

Various members of the family showed off the framed pictures on Instagram including Kylie Jenner and Kim Kardashian’s daughter North West – who filmed it for TikTok.

They captioned it: “better view of some of the portraits,” and included a snap of Khloé’s portrait.

In the photo, the star looks regal in a silver off-the-shoulder gown and sporting a traditional Victorian hairstyle.

The reality TV star is sporting her trademark extra long fingernails as she cradles her son, who is dressed in a white babygro.

Khloe’s baby boy, who was born via surrogate in July, has yet to be named publicly and she seems intent on not revealing his face properly just yet.

Fans commented on the portrait on the Reddit thread as one person claimed: “The hiding of Kylie and Khloe’s baby’s faces just shows how everything they do is for clout. They can’t even document their own babies in private… sad really.”

Someone else pondered: “I wonder if the portraits were made so far in advance and that’s why the two new babies don’t have their own? I know Khloe and Kylie aren’t showing pictures of the babies but they could have had portraits made of them and not share it with the public like they have been.”

A third person admitted: “The turned around babies are sending me omg,” and a fourth added: “Honestly these paintings are so f**king weird.”

In the clip, True is seen sporting her hair in a cute curly style, wearing a black tank top and grey pants while holding her cat.

The cat – Grey Kitty – is sporting what looks to be almost like a sweater vest, apparently designed by Skims, Kim’s fashion range.

True walks around holding the cat, who doesn’t look entirely thrilled about the ensemble.

Khloe captioned the post: “Lol I don’t know if Grey Kitty likes clothes yet. But this is so cozy and adorable.” 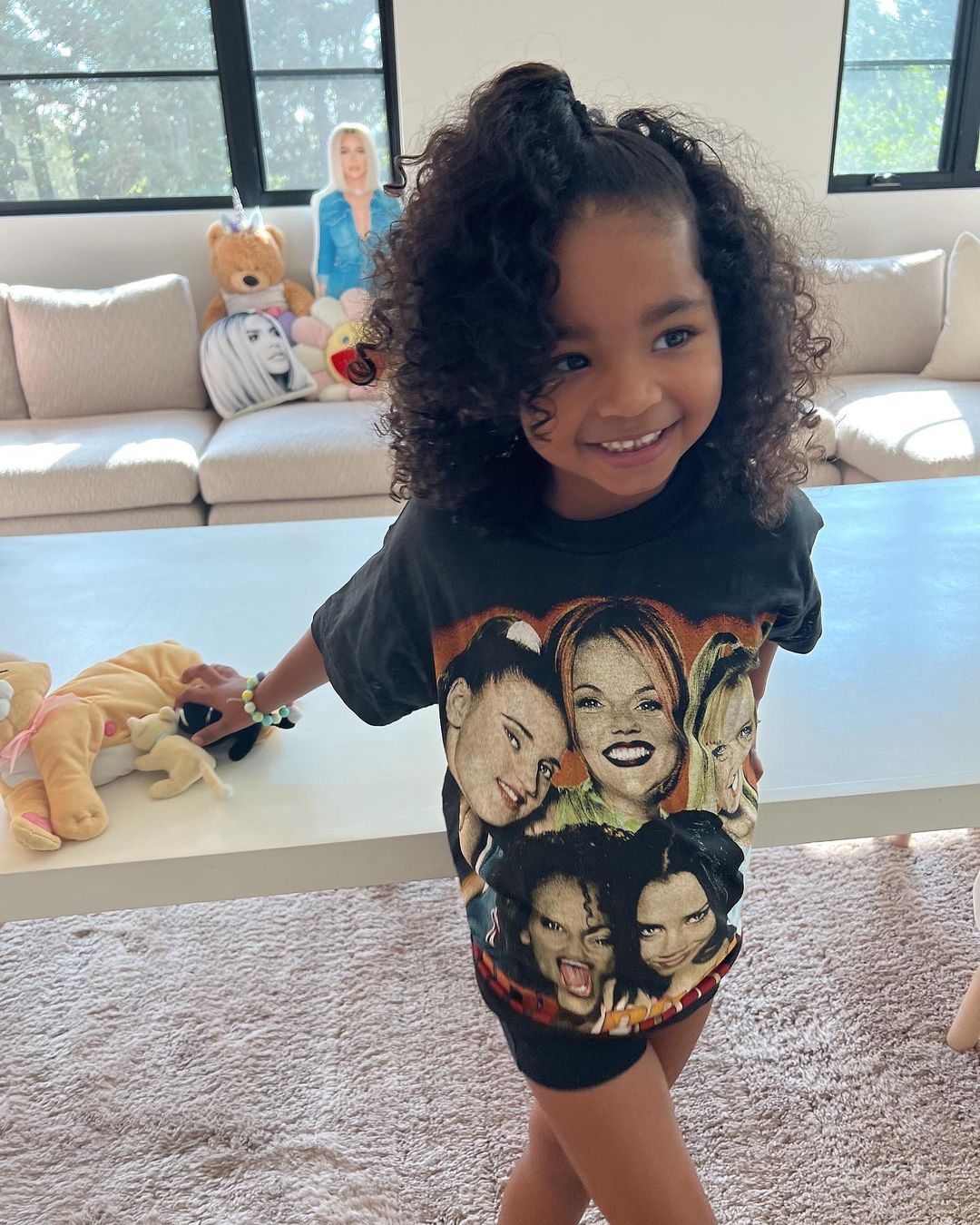 Fans were baffled, but some were impressed 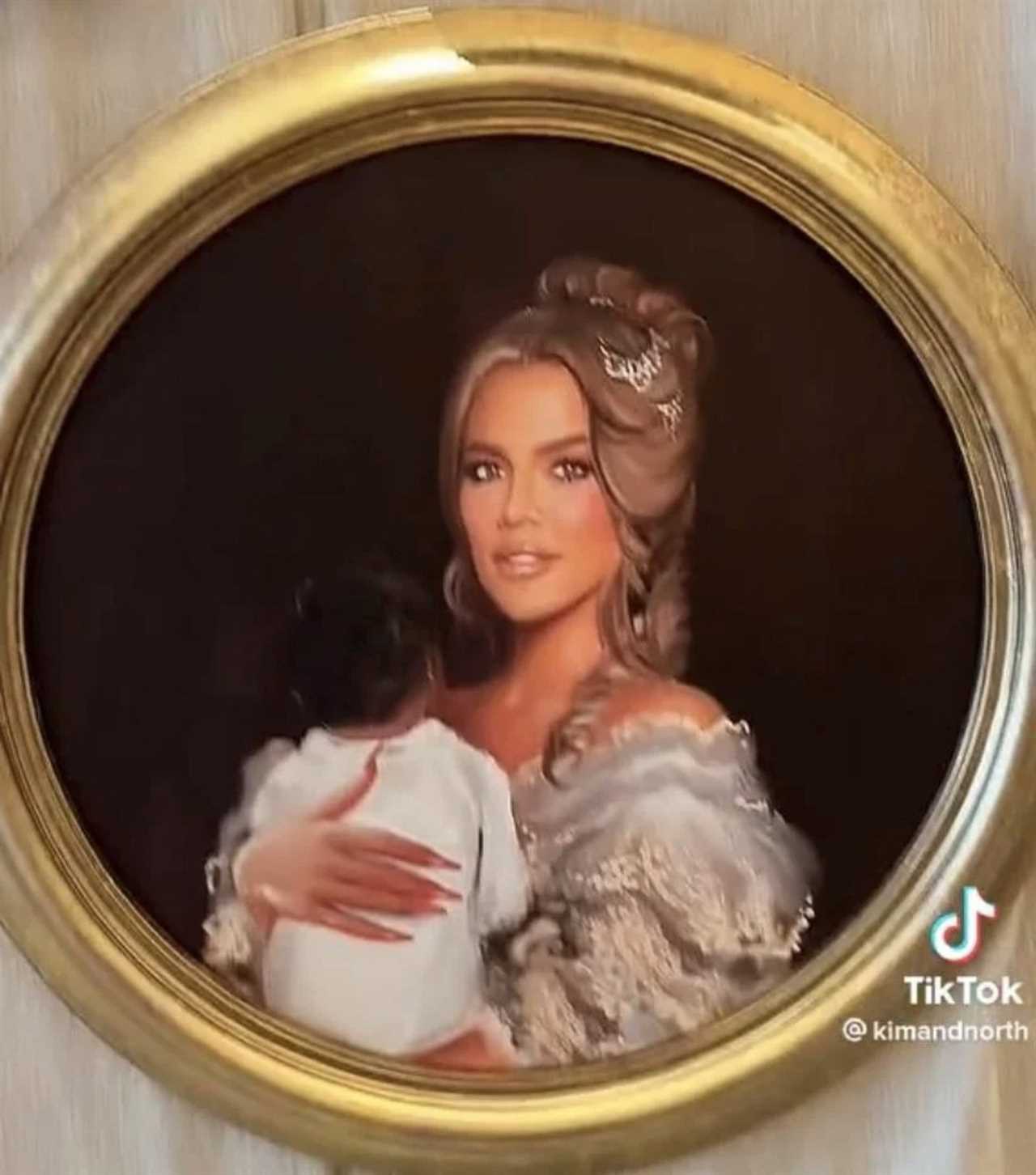 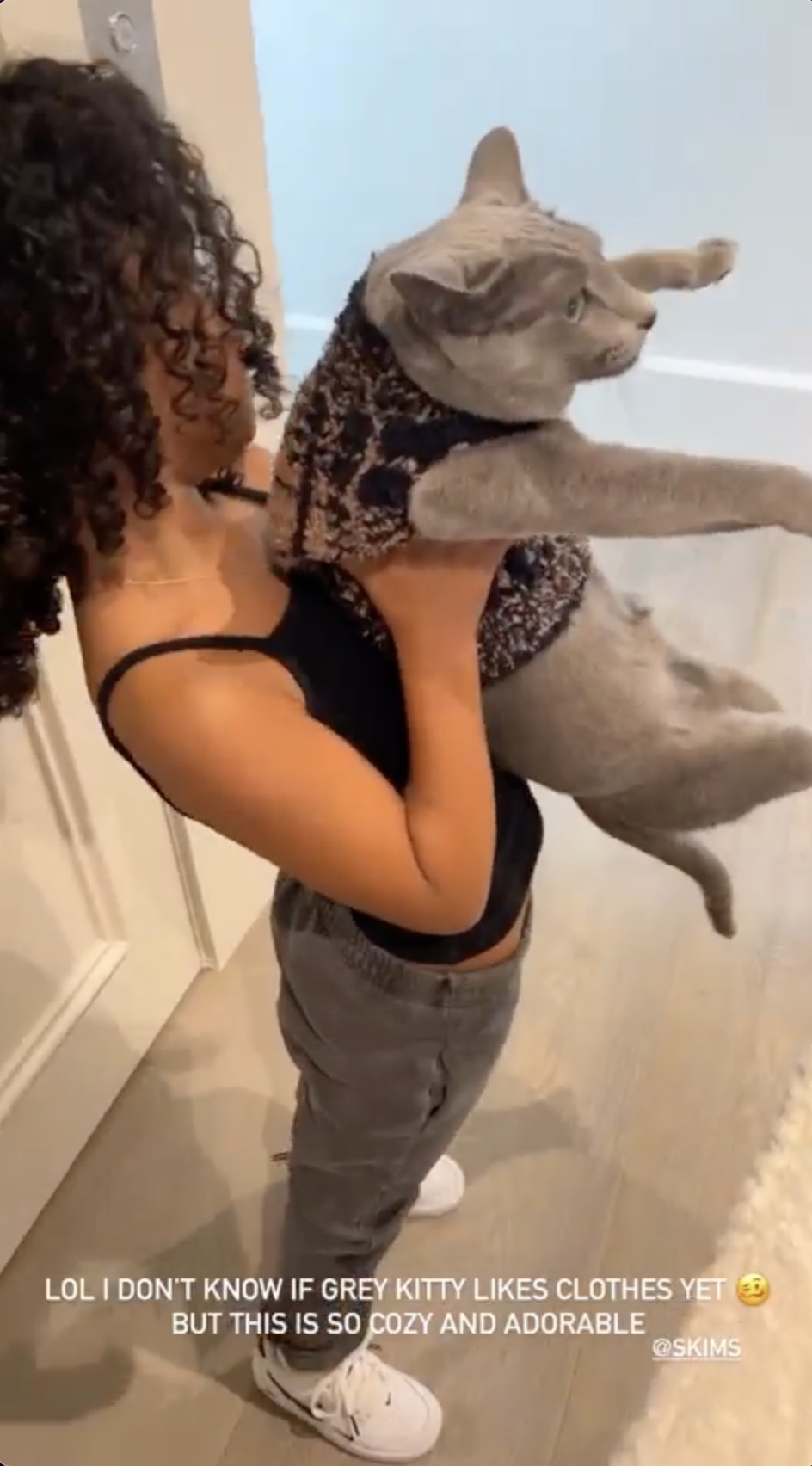 The star has also been showing off her cat, Grey Kitty
khloekardashianinthebackgroundnewphotos